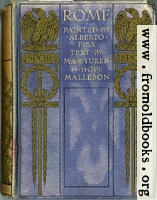 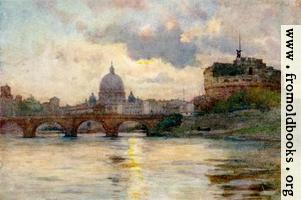 S. Peter’s and Castel Sant’ Angelo From the Tiber


A painting showing St Peter’s Basilica and Saint Angelo’s Castle from the river Tiber, at sunset. There is also a version of this image cropped for use as a computer desktop background, or wallpaper image. The tissue paper covering the plate bears the caption and also refers to pages 16, 32, 239, 242; I [...] [more...] [$] 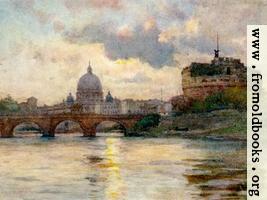 
A version of the painting of St. Peter’s Rome from the River Tiber cropped for use as a screen background, desktop, wallpaper image, root window picture, or whatever you want to call it. [more...] [$]

A Procession in the Catacomb of Callistus


Navigating the underground paths of the dead in Rome, carrying only a flickering torch to fend off the darkness! The note printed on the tissue-paper protecting this image reads: The nucleus of the great catacomb on the [...]hypogaeum of the family of the Caecilii, both pagan and Christian members of which had their burial places on the Appian Way. S. Cecilia ws buried here. See pages 42, 45, 46, 29. I have transcribed the passages as follows: [more...] [$]


This painting by Alberto Pisa shows the inside of the upper church of Sacro Speco, at the Benedictine monastery at Subiaco, near Rome, in Italy. The frescoes (wall-paintings) are from the fourteenth century, in the “Sienese” style. Lorenzo Loricato was a hermit from the 13th [...] [more...] [$] 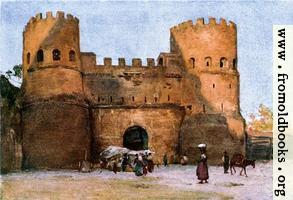 
“Gate in the Aurelian wall rebuilt by Belisarius. This is the gate of the Ostian Way to the basilica of S. Paul’s—one of the seven great pilgrimage churches—of [...] [more...] [$] 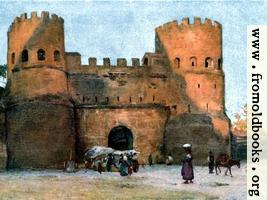 
A verison of the Porta San Paolo castle gate picture cropped so it fits on a computer desktop as a background image. [more...] [$] 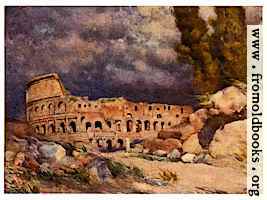 
Dark and broody skies over one of the world’s most famous landmarks in this painting by Alberto Pisa. [more...] [$] 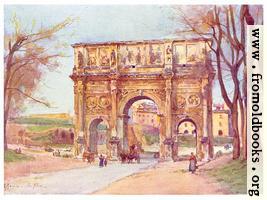 
Erected by the Senate in his honour A.D. 312. Eighteen years later he retired to Byzantium, leaving the Roman Bishops in virtual possession of the eternal city. (p. 234) [more...] [$]