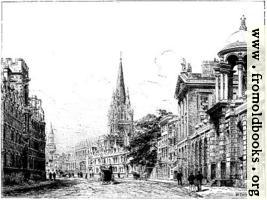 Most old towns are like palimpsests, parchments which have been scrawled over again and again, by their successive owners. Oxford, though not one of the most ancient of English cities, shows, more legibly than the rest, the handwriting, as it were, of many generations. The convenient site among the interlacing waters of the Isis and the Cherwell, has commended itself to men in one age after another. Each generation has used it for its own purpose; for war, for trade, for learning, for religion; and war, trade, religion, and learning, have left on Oxford their peculiar marks. No set of its occupants, before the last two centuries began, was very eager to deface or destroy the buildings of its predecessors. Old things were turned to new uses, or altered to suit new tastes; they were not overthrown and carted away. Thus, in walking through Oxford, you see everywhere, in colleges, chapels, and churches, doors and windows which have been builded up; or again, openings which have been cut where none originally existed. The upper part of the round Norman arches in the Cathedral has been preserved, and converted into the circular bull’s-eye lights which the last century liked. It is the same everywhere, except where modern restorers have had their way.

Thus the life of England, for some eight centuries, may be traced in the buildings of Oxford. Nay, if we are convinced by some antiquaries, the eastern end of the High Street contains even earlier scratches on this palimpsest of Oxford; the rude marks of savages who scooped out their damp nests, and raised their low walls in the gravel, on the spot where the new schools are to stand. Here, half-naked men may have trapped the beaver in the Cherwell, and hither they may have brought home the boars which they slew in the trackless woods of Headington and Bagley.” (p. 4)