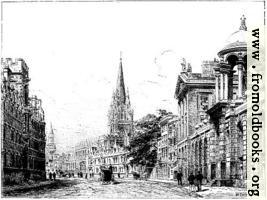 
“Most old towns are like palimpsests, parchments which have been scrawled over again and again, by their successive owners. Oxford, though not one of the most ancient of English cities, shows, more legibly than the rest, the handwriting, as it were, of many generations. The convenient site among the interlacing waters of the Isis and the Cherwell, [...] its occupants, before the last two centuries began, was very eager to deface or destroy the buildings of its predecessors. Old things were turned to new uses, or altered to suit new tastes; they were not overthrown and carted away. Thus, in walking through Oxford, you see everywhere, in colleges, chapels, and churches, doors and windows which have been builded up; or again, openings which have been cut where none originally existed. The upper part of the round Norman arches in the Cathedral has been preserved, and converted into the circular bull’s-eye lights which the last century liked. It is the same everywhere, except where modern restorers have had their way. [more...] [$] 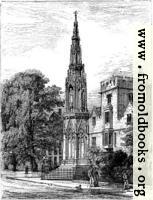 
“In Broad Street, under the windows of Balliol, there is a small stone cross in the pavement. This marks the place where, some years ago, a great heap of wooden ashes was found. These ashes were the remains of the fire of October 16th, 1555—the day when Ridley and Latimer were burned. “They were brought,” says Wood, “to a place over against Balliol [...]candida fossa, to the way leading by it.” To recover the memory of that event, let the reader fancy himself on the top of the tower of St. Michael’s, that is, immediately above the city wall. No houses interfere between him and the open country, in which Balliol stands; not with its present frontage, but much farther back. A clear stream runs through the place where is now Broad Street, and the road above is dark with a swaying crowd, out of which rises the vapour of smoke from the martyrs’ pile. At your feet, on the top of Bocardo prison (which spanned the street at the North Gate), Cranmer stands manacled, watching the fiery death which is soon to purge away the memory of his own faults and crimes. He, too, joined that “noble army of martyrs” who fought all, though they knew it not, for one cause—the freedom of the human spirit.” (pp. 98-100) [more...] [$] 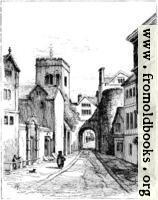 
The Bocardo, the mediaeval prison in Oxford, shown from the North side; the engraving is signed “S. R.” [more...] [$] 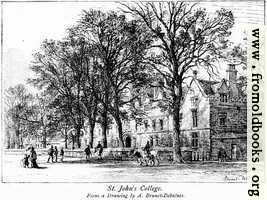 There are some more pictures of Oxford done by Haslehust, in colour.

I am working on a transcription of this book.

There is also an entry in the Nuttall Encyclopædia for Andrew Lang.