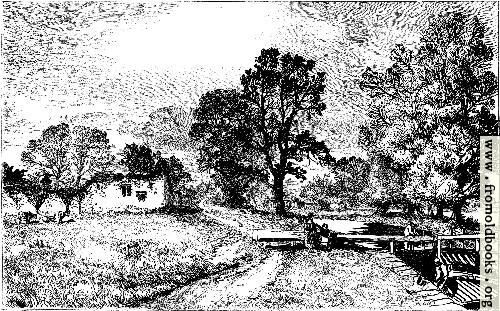 Any places of strength in Oxford would command the roads leading to the north and west, and the secure, raised paths that ran through the flooded fens to the ford or bridge, if bridge there then was, between Godstowe and the later Norman grand pont, where Folly Bridge now spans the Isis. Somewhere near Oxford, the roads that ran towards Banbury and the north, or towards Bristol and the west, would be obliged to cross the river. The water-way, too, and the paths by the Thames’ side, were commanded by Oxford. The Danes, as they followed up the course of the Thames from London, would be drawn thither, sooner or later, and would covet a place, which is surrounded by half-a-dozen deep natural moats.” (p. 9)

Godstowe now seems to be best known for its school, which I think might be in the grounds of what used to be Godstowe Abbey.

The engraving shows a barge waiting at a canal lock; a man wearing a hat is opening the sluice gates and there are people standing by ready to open the lock gates when the water is level. On the left of the picture are cows grazing in a field near some overgrown ruins, probably of Godstowe Abbey. Mature trees grow along the banks of the canal. The caption says:

From an Etching by Alfred Dawson.