[p.210] The Tower of Londondetails 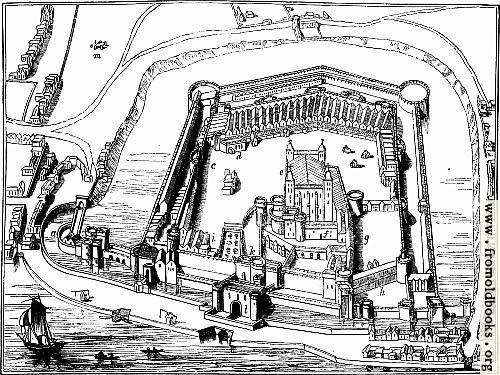 [p.210] The Tower of London, in London, London, England more

A birds-eye view: a map or plan of the castle.

The names which we have affixed to this plan are those which the respective portions of the fortress at present [1842] bear, with the exception of those parts here called “The Queen’s lodgings” and “the Queen’s gallery and garden.” Those who are familiar with the Tower will feel little difficulty in tracing upon this plan the exact buildings which remain; but the casual visitor, to whom the Tower has conveyed a notion of a town within a fortress, will not so easily understand how this place could once have been, even in times of comparative comfort and sploendour, a palace for the monarch, a treasury for the chief wealth of the Crown, a royal mint, an armoury, a menagerie, a state prison.

Here, in the plan before us, are large areas, courts within courts, ranges of offices communicating with the chief buildings upon a common arrangement, unencumbered external walls and bulwarks, something altogether which gives a notion of power and splendour, such as befit the abode and the defence of a long line of warrior kings.

At the date of this plan [approx. 1597] the Tower had ceased to be the residence of the sovereign. The chattels of the Crown were no longer moved about from the Tower to Westminster and Greenwich. Whitehall had become the centre of courtly splendour; but the Tower was still the seat of all the great attributes of royalty, and it was occasionally occupied by the monarch upon extraordinary solemnities.” (p. 209)