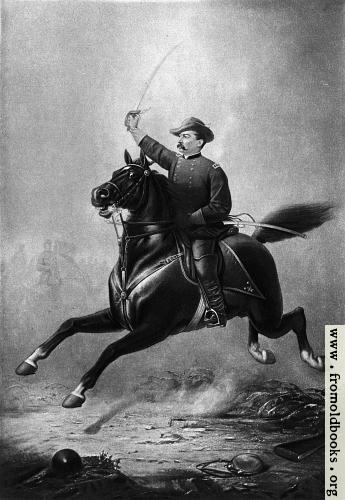 [Philip Sheridan]’s next operations, however, were the most important, as they have become the most renowned, in his career. Passing through Strasburg [USA], he posted his troops on the further bank of Cedar Creek, while he himself, on October 16th [1864], went to Washington in response to a request from Secretary Stanton, for consultation. Before the sun rose on the morning of the 19th, Early, who had been reinforced, surprised, during a fog, the left of the Union army and uncovered the position also of the Nineteenth Corps, capturing twenty-four guns and about fourteen hundred prisoners. General Wright succeeded in retaining his grasp on the turnpike by moving the Sixth Corpos to its western side and the cavalry to its eastern; but the whole army in the process had been driven back beyond Middletown.

Sheridan was at Winchester [USA] at this time, on his return from Washington. Hearing the noise of battle, he dashed up the turnpike with an escort of twenty men, rallying the fugitives on his way, and after a ride of a dozen miles reached the army, where he was received with indescribable enthusiasm. This famous incident gave rise to Buchanan Read’s stirring poem of Sheridan’s ride, now onw of the most popular pieces in the repertories of public readers, both in England and the United States. After a lapse of a few hours, spent in preparing his forces, Sheridan ordered an advance, and literally sqwept the enemy from the field in one of the most overwhelming and decisive engagements of the war. All the lost Union guns were retaken, and twenty-four Confederate guns and many wagons and stores were captured. Congress passed a vote of thanks to Sheridan and his troops for the “brilliant series of victories in the valley,” and especially the one at Cedar Creek. Sheridan was appointed by the President a major-general in the army “for the personal gallantry, military skill, and just confidence in the courage and patriotism of your troops,” as the order expressed it, “displayed by you on October 19th” [1864].” (p. 361)

T. Buchanan Read also painted the picture, which is reproduced in the book by photogravure. It was commissioned by the Union League Club of Philadelphia.

The poem (which, it is said, was written in one hour, and perhaps is less accurate on the historical details than one might hope) is not in the book, but is annexed here for the interested reader. Today’s poems about civil wars use terms like “terrorist insurgents” and do not give the other side the benefit of having an “army” at all.

Up from the South, at break of day,
Bringing to Winchester fresh dismay,
The affrighted air with a shudder bore,
Like a herald in haste to the chieftain’s door,
The terrible grumble, and rumble, and roar,
Telling the battle was on once more,
And Sheridan twenty miles away.

And wider still those billows of war
Thundered along the horizon’s bar;
And louder yet into Winchester rolled
The roar of that red sea uncontrolled,
Making the blood of the listener cold,
As he thought of the stake in that fiery fray,
With Sheridan twenty miles away.

But there is a road from Winchester town,
A good, broad highway leading down:
And there, through the flush of the morning light,
A steed as black as the steeds of night
Was seen to pass, as with eagle flight;
As if he knew the terrible need,
He stretched away with his utmost speed.
Hills rose and fell, but his heart was gay,
With Sheridan fifteen miles away.

Still sprang from those swift hoofs, thundering south,
The dust like smoke from the cannon’s mouth,
Or the trail of a comet, sweeping faster and faster,
Foreboding to traitors the doom of disaster.
The heart of the steed and the heart of the master
Were beating like prisoners assaulting their walls,
Impatient to be where the battle-field calls;
Every nerve of the charger was strained to full play,
With Sheridan only ten miles away.

Under his spurning feet, the road
Like an arrowy Alpine river flowed,
And the landscape sped away behind
Like an ocean flying before the wind;
And the steed, like a barque fed with furnace ire,
Swept on, with his wild eye full of fire;
But, lo! he is nearing his heart’s desire;
He is snuffing the smoke of the roaring fray,
With Sheridan only five miles away.

The first that the general saw were the groups
Of stragglers, and then the retreating troops;
What was to be done? what to do?—a glance told him both.
Then striking his spurs with a terrible oath,
He dashed down the line, ’mid a storm of huzzas,
And the wave of retreat checked its course there, because
The sight of the master compelled it to pause.
With foam and with dust the black charger was gray;
By the flash of his eye, and his red nostril’s play,
He seemed to the whole great army to say:
“I have brought you Sheridan all the way
From Winchester down to save the day.”

Hurrah! hurrah for Sheridan!
Hurrah! hurrah for horse and man!
And when their statues are placed on high
Under the dome of the Union sky,
The American soldier’s Temple of Fame,
There, with the glorious general’s name,
Be it said, in letters both bold and bright:
“Here is the steed that saved the day
By carrying Sheridan into the fight,
From Winchester – twenty miles away!”