Aquarius, or, the Water Bearer.details 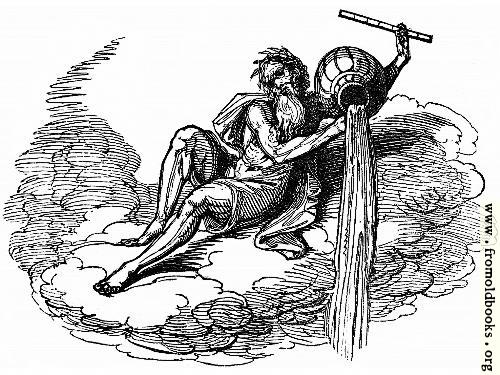 Aquarius, or, the Water Bearer. more

Aquarius, or, the Water Bearer.

The sun enters Aquarius on this day [21st January], though he does not enter it in the visible zodiac until the 18th of February.

Ganymede, who succeeded Hebe as cup-bearer to Jove, is fabled to have been changed into Aquarius. Canobus of the Egyptian zodiac, who was the Neptune of the Egyptians, with a water-vase and measure, evidently prefigured this constallation. They worshipped him as the God of meany breasts, from whence he replenished the Nile with fertilizing streams.

Aquarius contains one hundred and eight stars, the two chief of which are about fifteen degrees in height:

His head, his shoulders, and his lucid breast,
Glisten with stars; and when his urn inclines,
Rivers of light brighten the watery track.

I should mention that the book seems only to have woodcut engravings for a few of the signs of the zodiac, unfortunately:
Aquarius (21st january – 19th February)
Pisces (20th February – 20th March)
Aries (21st March – 20th April)
Virgo (23rd August – 22nd September)

Elsewhere on FromOldBooks.org you can find a complete set of signs of the Zodiac.