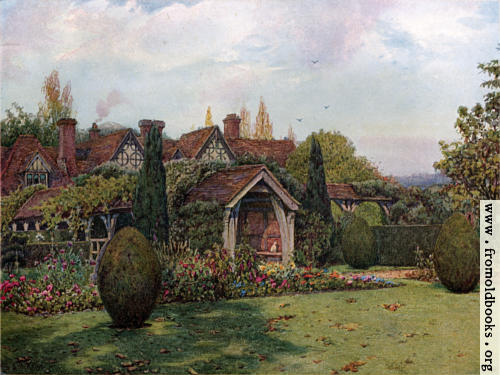 A half-timbered Elizabethan manor-house with tiled roof is here seen from the garden. Notice the cat sitting in the porch!

The moated Manor House of Great Tangley, in West Surrey (facing page 24), though its actual foundation dates from much earlier times, stood a fair type of an Elizabethan timber-framed dwelling, of the year 1582, until the latter half of the nineteenth century. It was then subjected to such extensive and overwhelming additions, not only to the house itself but to its environment also, that the old-world and homely air of the place is now practically become dissipated. (p. 24)

In fact, Tangley Manor is mentioned in the Book of Domesday, and hence predates A.D. 1070.