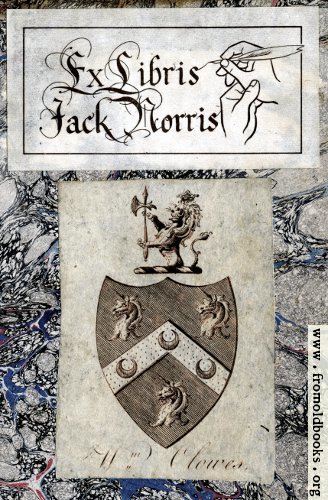 Two bookplates, one seeming older than the other:

And, probably older, one with an heraldc shield Azure on a chevron enshrined between three Unicorns’ hads erased or, three crescents gules.

This could be William Clowes (1779 – 1847) who invented the steam-powered printing press; his father, also William Clowes, was a school teacher, so if the bookplate belongs to the first owner, it could have been the father.

The endpapers of this book are marbled; probably the first owner of the book had it bound in the 1770s.