Ruins of the Abbey Church at Einshamdetails 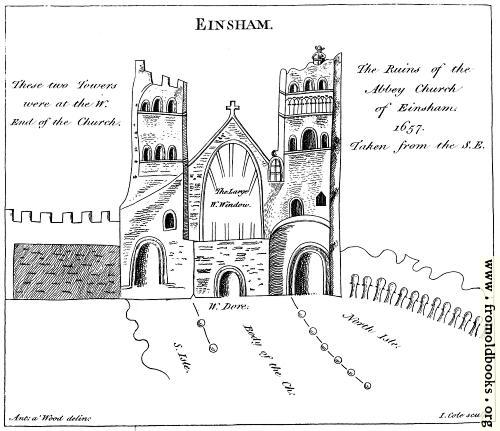 Ruins of the Abbey Church at Einsham, in Eynsham,Oxfordshire,England more

Ruins of the Abbey Church at Einsham

The Ruins of the Abbey Church of Einsham. 1657. Taken from the S.E.

The parish is now called Eynsham.

Other text on the image reads, These two Towers were at the W. End of the Church.
The Large W. Window.
S. Isle.
Body of the Ch[urch].
North Isle.

The Abbey was rebuilt some 40 or 50 years after the Norman Conquest, starting in 1109.

This is a fold-out engraving tipped in to Volume II.

A. W. [Anthony Wood] went to Einsham, to see an old Kinsman, called Thom. Barncote. He was there wonderfully strucken with a Veneration of the stately, yet much lamented, ruins of the Abbey there, built before the Norman Conquest [of 1066]. He saw then there two high Towers at the West end of the Church, and some of the North Walls of the Church standing. He spent some time with a melancholy Delight in taking a prospect [note a] of the ruins of that Place. [note **] All which, together with the Entrance or Lodg, were soon after pul’d downe, and the Stones sold to build Houses in that Towne and neare it. The Place hath yet some Ruins to shew, and to instruct the pensive Beholder with an exemplary Frailty. (p. 103)

a This Prospect is now in the Ashmolean Museum. It was lately engraved, but without any notice of Mr. Wood. (Wood’s MSS. in Mus. Ashm. 8505.)

There is no note ** in the book here.