The Parade and Pump Room, Leamingtondetails 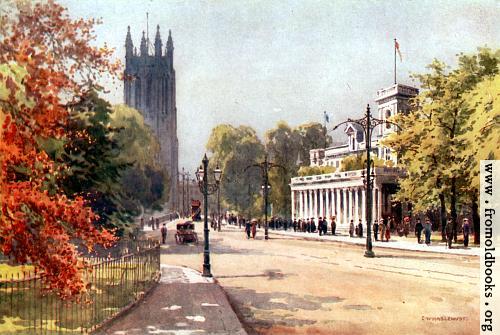 The Parade and Pump Room, Leamington

Crossing the gay Parade from the Jephson Gardens just at its very gayest here, the Grand Pump Rooms and Baths, erected in 1813 at a cost of £30,000, and greatly enlarged and improved since, stand before us, with their imposing colonnade supported by Roman Doric pillars, their spacious gardens, with a picturesque kiosk for the band in the centre, and a shady avenue of lindens, extending from east to west, on the North. Though the former glory of the Pump Rooms, when Royalty and the fashionable world of England were wont to sip their morning glass of spa water here, may have departed, these baths are still some of the best equipped and most modern of any popular island resort, quite equal, indeed, to those of Homburg [Hamburg?], Spa and Marienbad.” (p. 47)