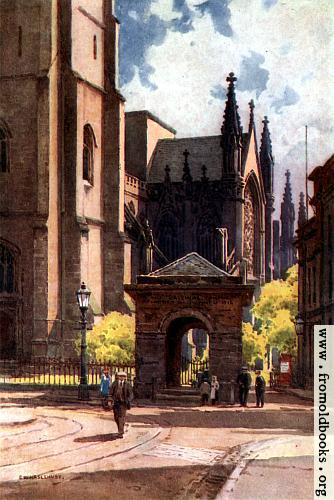 The Parish Church of Leamington was originally a chapel-of-ease to the mother church of St. Peter’s at Wootton Wawen, in the heart of the Forest of Arden. The Church is said [in this book] to date back to some time before 1230, although the camanile [i. e. bell-tower] dates from 1898.

The bells were re-cast in 1825 and extended to a full peal of six. The treble dated from 1621 and boer the inscription
“Come when I sound it or it will show
To Church you never wish to go.” (p. 51)

After [...] the magic waters [have been] quaffed at the Camdel Well—this is the antique-looking stone well-house near the church, originally built in 1803 by the [then] lord of the manor, Heneage, fourth Earl of Aylesford [...]” (p. 52)