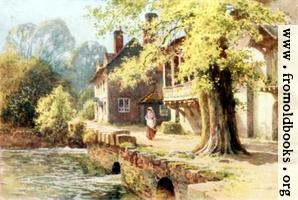 
Let all fair pilgrims note the postern door in the stone wall of the Cliffe grounds, near the picturesque Saxon Mill, with its decorative wooden balcony, where John Ruskin loved to linger, listening to the soft music of the mill wheel; for through that door, on 25th November 1773, “the divine Sarah” [...] [more...] [$] 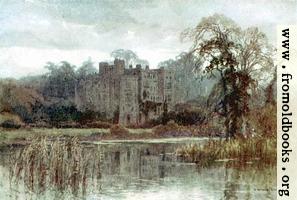 
“The Coventry road to Guy’s Cliffe is a royal and a literary road. Kings, queens, princes, poets, painters and authors have trodden it; also that luckless King’s favourite, Piers Gaveston, whose comely head fell from his shoulders upon Blacklow Hill, a few yards from the Cliffe, on 27th June, 1312, by order of that grim Earl of Warwick whom he in [...] [more...] [$]

The Leam at Leamington


“For from leafy Leamington every old, historic, and romantic spot in the whole of Shakeslpeare’s classic land can be visited and inspected in a day’s ride in carriage, coach, or motor car.” (p. 32) [more...] [$] 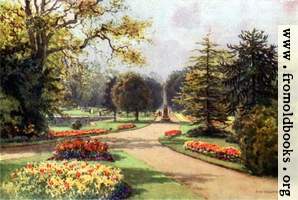 In the Jephson Gardens, Leamington


“Enter the Jephson Gardens now by this eastern end, and go right through to the Parade, and to the Pump Room and Gardens across the Parade. These handsoe Gardens take their title from the celebrated Dr. Jephson, who for many years was a resident of Leamington and made it his home, living in the elegant stonehouse at the corner of DaleStreet called [...] [more...] [$]


“The way to Nathaniel Hawthorne’s ‘nest of a place’ is up the shady Holly Walk, which leads immediately out of the Royal Parade, [...] by the imposing Renaissance Town Hall and the [...] [more...] [$] 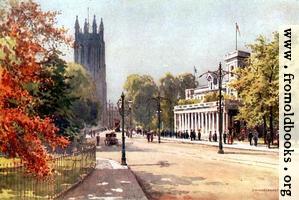 The Parade and Pump Room, Leamington


“Crossing the gay Parade from the Jephson Gardens just at its very gayest here, the Grand Pump Rooms and Baths, erected in 1813 at a cost of £30,000, and greatly enlarged and improved since, stand before us, with their imposing colonnade supported by Roman Doric pillars, their spacious gardens, with a picturesque kiosk for the band in the centre, [...] [more...] [$]