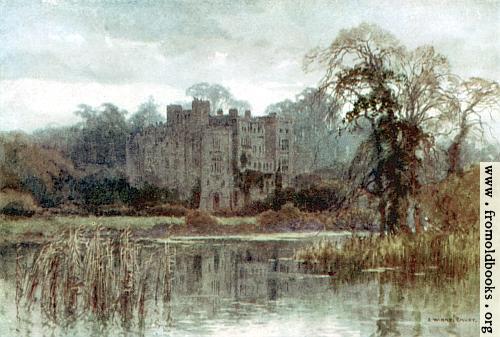 “The Coventry road to Guy’s Cliffe is a royal and a literary road. Kings, queens, princes, poets, painters and authors have trodden it; also that luckless King’s favourite, Piers Gaveston, whose comely head fell from his shoulders upon Blacklow Hill, a few yards from the Cliffe, on 27th June, 1312, by order of that grim Earl of Warwick whom he in sport had called the ‘Black Hound of Arden’. And this is not all. [...] And there, looking westward down a long avenue of Scotch firs, forming a picture-like theatre almost unexampled in England, is the romantic abode of Guy’s Cliffe – the ancestral seat of the Greatheeds, the Berties, the Percys, and now the possession and home of Lord Algernon Percy, brother of the Duke of Northumberland.” (pp 28,29)

Although it’s not open to the public, you can get a fairly good view from the nearby Saxon Mill. A house here is mentioned in the Domesday Book, and it is said to have been founded by Guy of Warwick lin the 10th centuey, a person well-known to lovers of the Robin Hood tales.

Since the 1950s the house has been in a state or disrepair. In 1992 part of it seems to have been burned down for the purpose of making a vampire film. See Robert Courts’ page on Guy’s Cliffe (his Website home page doesn’t work, however).