My copy has a repair to a tear on the dust jacket. The picture on the cover is Branxholm Tower, reproduced slightly better inside the book. [more...] [$] 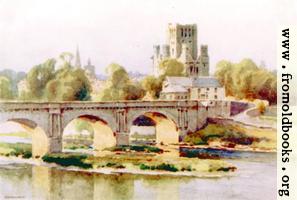 
Kelso is a town in the Borders; the abbey was mostly destroyed at the English Reformation. [more...] [$]


According to Discover the Borders, “This is a well preserved and well restored border tower house dating from the 15th century. Situated on Sandyknowe Farm, it is visible for miles around. Formerly the home of the Pringles of Smailholm and later that of the Scotts of Harden, it was well known to Sir Walter Scott who came [...] [more...] [$] 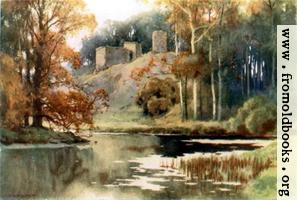 
Says Discover the Borders, “The ruins of the famous castle of Roxburgh, favourite of Scottish kings, seated on its massive grassy mound between the Rivers Tweed and Teviot.” [more...] [$]


“It was from Branxholm, on the Teviot above Hawick, that another Scott of the name – generation after generation were Walters – rode forth to rescue ‘Kinmount Willie’ [...]Lay, opens at and returns again to Branxholm Ha’; it was at the Tower Inn, at Hawick, where the Duchess Anne of Buccleuch and Monmouth held her receptions, and that the greatest of all the Sir Walters parted from his guests the Wordsworths.” (p. 21) [more...] [$] 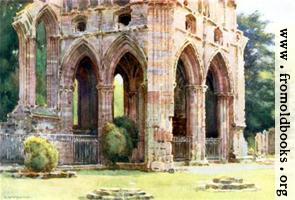