The Chapel of St. Pancras in St. Augustine’s Monastery, Canterburydetails 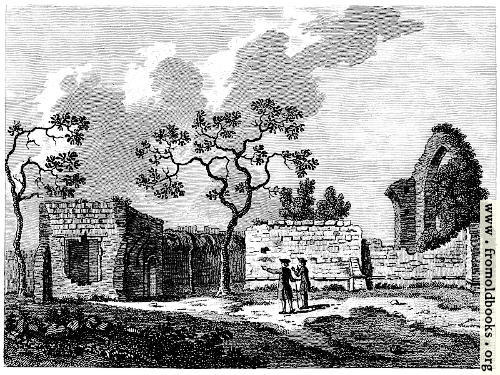 The Chapel of St. Pancras in St. Augustine’s Monastery, Canterbury

Grose, Francis: “The Antiquities of England and Wales Vol III” (1783)

The ruins of this little oratory stand near the south-easternmost part of the Abbey-close. It is commonly supposed to be of great antiquity, but this opinion is controverted by Somner, who gives very good reason for his doubts.

“The next thing (says he) is the chapel of St. pancrace, built (as the private chroniclers make report) before Augustine came, and used by the king, before his conversion to Christianity, for the place of his idol-worship; but after it, the first that Augusting, after he had purged it from the worship of the false, consecrated to the service of the true God, and dedicated to St. Pancrace: wherewith the Devil, all enraged, and not brooking his ejection from the place he had so long enjoyed, the first time that Augusting celebrates mass there, furiously assaults the chappel to overturn it; but having more of will than power to actuate his intended mischief, all he could do was leave the ensigns of his malice, the print of his talons [such as I have elsewhere seen by ivy growing and eating into old walls, even of stone] on the south porch of the wall of the chapel, where they are visible to this day. Thus Thorn tells the tale; and no better than a tale can I conceive it to be.

This view, which represents the south aspectm ws drawn anno 1755. The traces of the devil’s claws appear on the east side of the small square building, formerly the porch of the chapel.” (pp. 87 – 90)

I have omitted the “reasons” why the chapel cannot be old: it is in fact Saxon, and predates the arrival of St. Augustine in England (in A.D. 597), although it may have been rebuit in the seventh century. Even so, in 1755 it was over a thousand years old, and has been described as the first Christian church in England. Evidence of christian activity in 2nd century Southampton makes this unlikely, but it is fair to say that Christianity died out completely, or that there is no trace known of it, for several hundred years before the coming of Augustine.

The part in square brackets is thus in the book, and is probably an insertion by Francis Grose, the author, into the quoted passage from Somner.