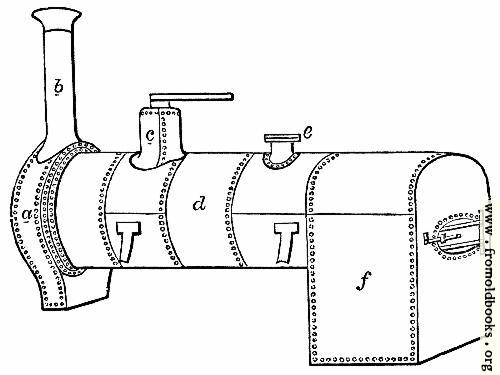 256. Locomotive Boiler.—All locomotive boilers are of the class called multibar: they consist essentially of the barrel filled with tubes, while the two ends are named respectively the furnace, or fire box, and the smoke box. Boiler plates should be rolled from the best iron to about three-eighths or half an inch in thickness; these form the barrel, which has a diameter varying from three feet to four feet three inches in different boilers, and consists of three or six plates for each boiler, and their joints are arranged to give as much strength as possible.

d is the barrel of tubes. f is the fire box. The fire door is seen at the end in front of which stands the driver and fireman, the latter supplying the engine with coke by throwing it into the furnace; the fire door is always oval. e is the safety valve; there is also a second safety valve sometimes placed on top of c, the steam dome or chest. b is the chimney, bolted on to the top of the smoke box a.” (p. 243)