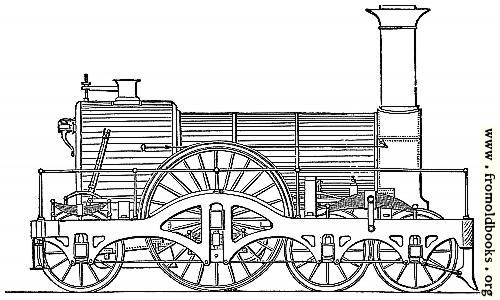 “General Description of a Locomotive.—This is one of the Great Western express engines, running on eight wheels; the large wheel is the driving wheel, the others are called the leading and triling wheels; the chimney is seen on the right hand, the furnace on the left, and the barrel of the boiler with the tubes in the middle. Upon the top of the furnace is the steam dome and the safety valve.” (pp. 238, 240)

The Great Western Railway was created in 1835 but no longer exists; an enthusiast’s Web site has photographs of similar, but more recent, locomotives. See also victorian railways and Science and Society Picture Library, which has a watercolour of ‘Tartar’, a 4-2-2 locomotive built in 1848 of the ‘Iron Duke’ class designed by Sir Daniel Gooch and built at the Great Western Railway (GWR) Swindon works.

Note: the US English term for a railway engine is a railroad locomotive.