Steam and the Steam Engine (page 2/2)

Front Cover of Evers’ ‘Steam and the Steam Engine’


The front cover says that the book is part of Collins’ Advanced Series. [$] 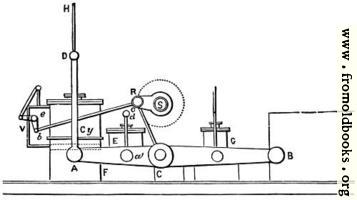 
This is a steam engine for driving a ship (a paddle-boat in fact) taken from the Marine Engines chapter: [more...] [$]


“The annexed illustration will give a much better idea of the locomotive engine and boiler than the last one.” (p. 241) [more...] [$] 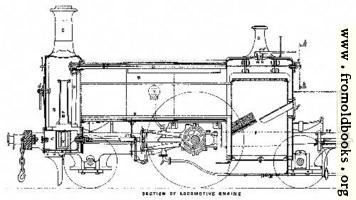 
This is a cross-section through a steam engine (i.e. a railway locomotive, or a railroad engine as they say in North America). The description is a little hard to follow, so I made a [...]in colour to make them stand out. The description (also reproduced there) is as follows: [more...] [$] 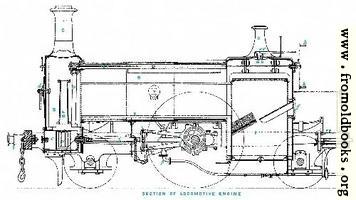 
This is a version of Plate I in which I have coloured the letters blue, to try to make it easier to follow the description, which I have also repeated here: [more...] [$] 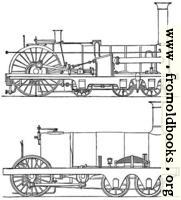 
“The above figure is another plan of arranging the locomotive. The examples given on page 238 have eight wheels, the general run is six wheels with the large driving wheel in the middle; but in Crampton’s arrangement the large driving wheel is behind. In his engines circular motion is first given, by inside cylinders, to a cranked shaft, [...] usual manner, and motion is communicated from this shaft to the driving wheels behind the fire box by side rods. [more...] [$]


“In the example here given, the engine is on two trucks [bogies]. The one end can be turned so that the double sets of wheels are not in the same straight line. In practice it is found that bogie carriages bring a great strain on curves. In the “Little Wonder,” which works on the Festiniog Railway [in Wales], constructed to a gauge of 1 ft. 11½ in., [...] [more...] [$] 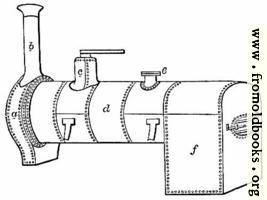 
“256. Locomotive Boiler.—All locomotive boilers are of the class called multibar: they consist essentially of the barrel filled with tubes, while the two ends are named respectively the furnace, or fire box, and the smoke box. Boiler [...] three-eighths or half an inch in thickness; these form the barrel, which has a diameter varying from three feet to four feet three inches in different boilers, and consists of three or six plates for each boiler, and their joints are arranged to give as much strength as possible. [more...] [$] 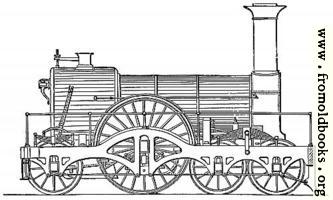 
“General Description of a Locomotive.—This is one of the Great Western express engines, running on eight wheels; the large wheel is the driving wheel, the others are called the leading and triling wheels; the chimney is seen on the right hand, the furnace on the left, and the barrel of the boiler with the tubes in the middle. Upon the top of the furnace is [...] [more...] [$]