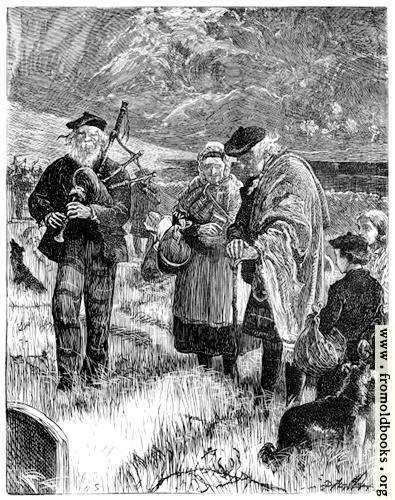 “Silent they stood, each gazing on the dust
Of kindred;—on the well-beloved ones
Whom they should never lie beside in slumber.”

William Small was a Scottish artist, although he moved to London when he was about 23 years old. He gained some reputation with watercolours, and was even made an honorary member of the Royal Scottish Academy.

It was in our connectoin with Good Words that we first came in contact with Robert Buchanan, who was at that time coming right to the front as a popular poet. At our invitation he was induced to write and procure verses to the set of pictures by Fred Walkerand others, which were published as “Wayside Posies,” and for which he gave us much beautiful work. After this we made arrangements with him to produce an illustrated book, to be called “North Coast ad Other Poems,” which afforded plenty of cope for pictures of varied kinds. [...] There are also two very fine drawings by William Small from the truly pathetic [i.e. filled with pathos] story of “The Exiles of Glen Oona.” (p. 234)

In this picture an older, bearded man plays the Scottish bagpipes for the man, woman, child and dog at the grave of the one they lost.