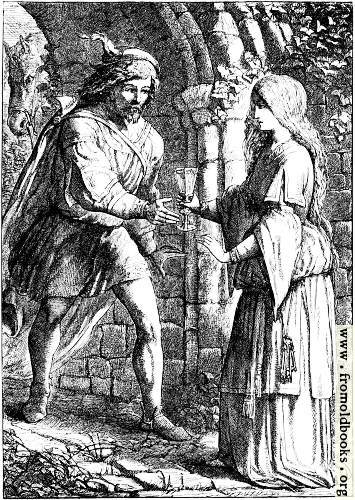 Messrs. D. Appleton, of New York, requested us to provide a set of illustrations to the Poetical Works of William Cullen Bryant. They wished for a large number by Birket Foster, who at that time was at the very height of his popularity for black and white work. Out of something like one hundred pictures he gave us thirty-six, all of which are beautiful examples; many of them exquisite little vignettes. William Harvey supplied some graceful pictures; Sir John Tenniel, J. R. Clayton, and F. R. Pickersgill were responsible for several of the figure subjects; while Edward Duncan drew some very delicate little sea pieces.

There are many of our own drawings in this book, of which we make mention—“The Battlefield”; “An Indian Girl’s Lament”; “Life”; “A Northern Legend’; “The Lady of Castle Windeck” [this image]; and “An Evening Reverie.” (p. 180)

The caption of this picture is as follows:

“The careless words had scarcely
Time from his lips to fall,
When the Lady of Castle Windeck
Came round the ivy wall.

“He saw the glorious maiden
In her snow-white drapery stand,
A bunch of keys at her girdle,
The beaker high in her hand.” (p. 185)

[drawn and engraved] By Edward Dalziel.

W. Cullen Bryant appears not to be popular today.