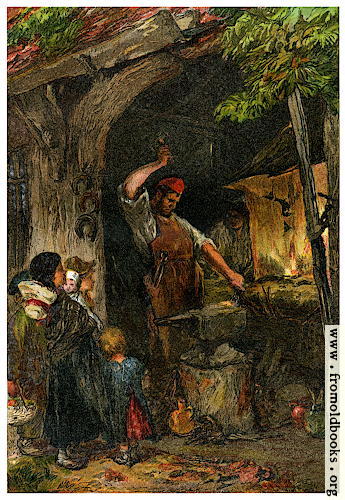 The blacksmith stands wearing his boiler suit; he has a hammer in one upraised hand ready to strike hot metal on his anvil; perhaps he is making a horseshoe or maybe it’s a manacle for a slave. In the background his apprentice keeps the fire going; in the foreground, standing next to a mighty tree whose branches seem to support the roof of the smithy, we see a woman with two children.

When horses were as common as the automobile is today, the blacksmith’s smithy was as frequent a sight as the car mechanic’s shop today.

However dull and sleepy our village may have been, there was always life and stir at the blacksmith’s forge. On a sultry July afternoon, when the only sounds to be heard were the drowsy hum of a blue-bottle in a corner of the room, or the angry buzzing of a bewildered wasp against the window-pane, one had but to turn round the corner of “the street” and find amusement and occupation at the door of our local Vulcan. The sharp musical ring of hammers was always to be heard, and the gossip of the country side was in constant flow. The waggoner from Mobberley has brought a couple of his horses to be shod. Farmer Morris, of the Cow-trees, has ridden over to get a new fastening for his barn door. Young Squire Jenkins wants a dog collar mended.

Their horses are safely tethered outside under the trees, quietly champing their oats and chopped straw. Pert, saucy sparrows are enjoying a banquet from the crumbs that fall from the rich man’s table: for, be it observed that we cannot feed ourselves or our dependents without giving the wild things of Nature a share. If we sow our corn, the birds of the air will help themselves to a portion. He who cares for the sparrows, claims at least a tithe for them, and the veriest miser cannot withhold it, if he would. Through some hole in the sack our superfluity escapes to feed them. And so round the tethered horses of the farmers there assembles a levée of hungry dependents, who gather up the fragments, that nothing be lost. Lounging in the door-way are the customers waiting till Vulcan, and his attendant Cyclops, have finished the job in hand.

A village smithy is always a study for the artist. What masses of light and shade! How the colours come out in the light of the forge, as the flames leap up at the fierce blast of the bellows and the sparks fly from the anvil! But Longfellow has made the scene his own:—

Under a spreading chestnut-tree

The smith, a mighty man is he,

With large and sinewy hands;

And the muscles of his brawny arms

Are strong as iron bands.

His hair is crisp, and black, and long,

His brow is wet with honest sweat,

He earns whate’er he can,

And looks the whole world in the face,

For he owes not any man.

Week in, week out, from morn till night,

You can hear his bellows blow;

You can hear him swing his heavy sledge,

With measured beat and slow,

When the evening sun is low.

And children coming home from school

Look in at the open door;

They love to see the flaming forge,

And hear the bellows roar,

And catch the burning sparks that fly

He goes on Sunday to the church,

And sits among his boys;

He hears the parson pray and preach,

He hears his daughter’s voice,

Singing in the village choir,

And it makes his heart rejoice.

He needs must think of her once more,

How in the grave she lies;

And with his hard, rough hand he wipes

A tear out of his eyes.

Onward through life he goes;

Each morning sees some task begin,

Each evening sees it close;

Has earned a night’s repose.

Thanks, thanks to thee, my worthy friend,

For the lesson thou hast taught!

Thus at the flaming forge of life

Our fortunes must be wrought;

Thus on its sounding anvil shaped

Each burning deed and thought.

Under the picture are, “E. Whymper, London,” and, “By Hodson’s Chromographic Process.”

Hodson & Castle was the name of a firm of printers in Lambeth, London, UK, in the late nineteenth century. They advertised colour printing. I found the following notes in William Gamble Birch’s book Colour Printing and Colour Printers (Pitman, 1910), which mention this exact print:

Five-and-thirty years ago the old aquatinting method had a new lease of life, in much the same modified form, for colour printing, as that in which Leighton used it. This was due to Mr. Samuel J. Hodson, a well-known water-colour artist, and son of the first Secretary to the Printers’ Pension Corporation. His “Chromographic Process” had a pedigree which might be traced back to Leighton, to whom Hodson was apprenticed, although when his time was up he turned his attention to painting instead of printing. One day, long afterwards, he met his friend Edward Whymper, of Alpine fame, who was himself an artist, and worked in that capacity to illustrate his own books as weU as those of others. He thought there was an opening for a new colour-printing process, and broached the subject to Hodson, knowing his past connection with that branch of the trade. Hodson hit upon aquatint as the method most suitable to use for the purpose, and having perfected his adaptation of it, got out some specimen prints, of which an excellent one, “The Village Blacksmith,” produced in thirteen colours on an “Albion ” press, may be seen in The Circling Year (1871). Soon after this the process came under the notice of Mr. W. L. Thomas, founder of the Graphic, and in the Christmas, 1875, number of that periodical appeared a plate by Mr. Hodson, entitled “Missed,” after a water-colour sketch by Miss E. Thompson. From that time until 1898 Mr. Hodson, with the aid of his assistants, supplied the blocks for all the special presentation colour plates which appeared in the Graphic. Many of them, such as Sir J. E. Millais’ “Cherry Ripe” (1880). of which over half-a-million copies were issued; Sir F. Leighton’s “Desdemona” (1890); Luke Fildes’ portrait of H.M. the Queen (1894) and his “Shep- herdess” (1897), and Lord Leighton’s “Flaming June” (1896), will be familiar to most readers of this volume. In the last named, as in some other plates produced by this process, a wood block was used to give a small part of the outlines, but most of the prints were pure aquatints, so far as the method of producing the blocks was concerned, the grounds being prepared and the tones etched in the usual way, and casts taken from the plates subsequently, for relief printing. There was a plate for each colour, four or five being the average number used, though sometimes as many as nine were called for. Compared with the three-colour process that has now taken its place in the Graphic, Mr. Hodson’s method was of course slow, but whether it in any way suffers by comparison is a matter that can safely be left to the judgment of the artistically minded. Noble’s Colour Printing (1881) contains a detailed account of the various processes necessary for the production, by this method, of the coloured plates for the Christmas, 1879, number of the Graphic. (p. 170)