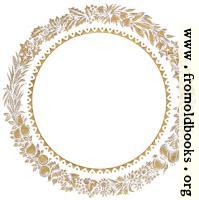 
Today people looking at this circular wreath design stamped in gold would think first of Christmas: there’s holly and ivy and what could pass for ornaments. But if you look more closely it represents the whole year, [...] [more...] [$] 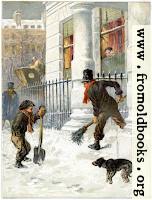 
A man in boots and tall hat, scarf, jacket and rolled-up trousers, stands on the steps of a grand front porch with stone columns while two faces peer out of a window in this city scene. A boy on the street holds a snow-shovel in one gloveless hand and has his other had in his pocket. He wears a cap and scarf. A dog looks on in the snow-covered street [...] [more...] [$]

Title page for Circling the Year


The title page for ‘Circling the Year”for 1870 has a leafy border framing two large flowers at the top, and representations of the year beneath: spring with flowers; summer with warmth from a starry sky; the autumn [...] [more...] [$] 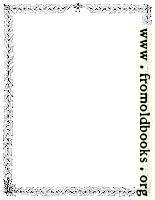 
This leafy border features ivy with some holly thwoen in for good measure: it’d be great at Christmas but could be used at other times too. It surrounds the titlepage of the book. [more...] [$] 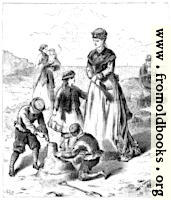 
A Victorian sea-side outing, with children palying on the beach, a nanny or mother standing by them holding a boook, and, in the backgorund, a man, perhaps their father, with a top hat and cane. The children are making a sand-castle. They are all fully dressed, [...] [more...] [$]


The blacksmith stands wearing his boiler suit; he has a hammer in one upraised hand ready to strike hot metal on his anvil; perhaps he is making a horseshoe or maybe it’s a manacle for a slave. In the background his apprentice keeps the fire going; in the foreground, standing next to a mighty tree whose branches seem to support the [...] [more...] [$] 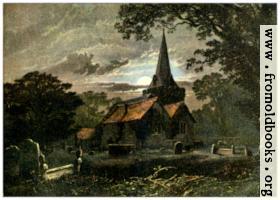 For the stranger, the fatherless, the widow


This full-page illustration is enclosed in a green and gold border with gold stalks of wheat around an engraving of a woman in old-fashioned clothing harvesting wheat. Underneath the engraving in black and gold is the [...] [more...] [$] 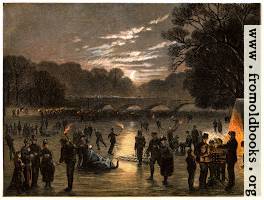 
A night-time Winter scene in Victorian London: it’s the Serpentine lake in Hyde Park, and it’s frozen over with ice. People are skatin, carrying burning torches to light their way; in the foreground a man sells roast chestnuts; someone is pushing a passenger on a sleigh, warmly wrapped [...] [more...] [$] 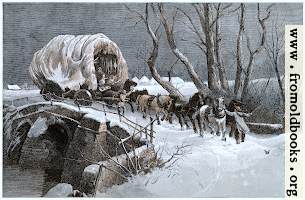 
A covered wagon, drawn by four pairs of horses, crosses a snow-covered stone bridge over a river in this chromolithograph. I’m not sure whether the wagon brings gifts or relatives or is coming to take away naughty children, as the book doesn’t seem [...] [more...] [$]