The book is quarter leather. It has obviously been rebound at some point after some damage, as some of the pages are trimmed. [$]


The fore-edge of the book: you’re looking at the front of the book, the opposite to the spine. It is marbled, a decoration that also served to seal the edges of the pages so that the book can be dusted more easily. [more...] [$] 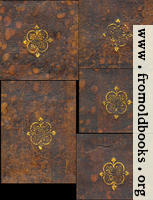 
Detail from the spine of the book (the back edge with the writing on it): I collected the five hand-tooled gold decorations together. [more...] [$]


This bookplate, or “ex libris” as they are sometimes called, is pasted inside the cover of “The Holy Court.” The pencil writing at the top right is a bookseller’s annotation from the [...]spera in deo, which is, Hope in God. Under the family crest is the name Walter Sweetman. I’ve been told it’s the bookplate of the Irish Poet by that name! [more...] [$]


The coat of arms from the bookplate. it is surmounted by a dragon’s head, and there is a bird, perhaps a falcon, in the coat of arms itself. This is a detail from the Bookplate image. [more...] [$] 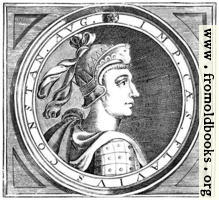 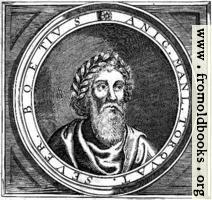 
This title page occurs maybe three quarters of the way through the book; probably the book was published in separate sections and has been bound into a single volume. I made a separate image for the Crown woodcut on the grounds that you can’t have too many crowns. [more...] [$] 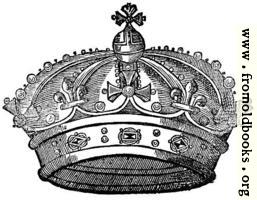 
A woodcut of a crown, used as decoration on the title page of Disturbers of the Holy Court. [$] 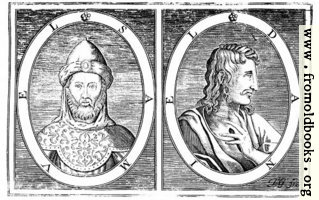 Portraits of Samuel and Daniel


These two portraits were made on a single plate (probably a woodcut or wood engraving); no source is given for the likenesses (or possibly unlikenesses) of these two characters [...]The Statesmen which also includes Moses. [more...] [$]