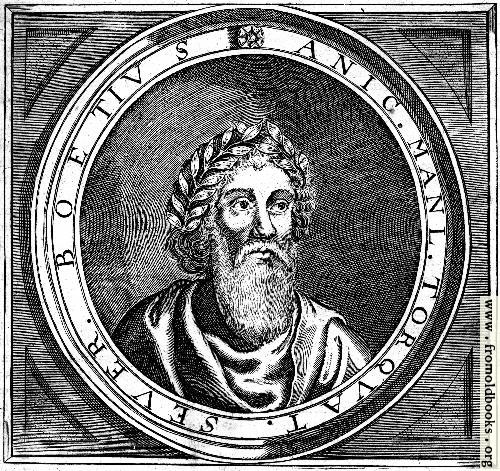 Behold here how I make a great Statesman to walk along in his rank, the honour of the Gown, and the singular Ornament of the purple Garment, who hath had the priviledge to revive Learning in his life, and at his death to bury all the Roman Greatness in his Tomb.

It is the most illustrius Boetius, whom I have selected almost in the first Ages of Christianity, as the most accomplished personage, that hath flourished in the quality of a man of the long Robe throughout Christendom. For if you consider his extraction, it was the noblest of his time; if you regard his means, he was of the most honestly rich; if you reflect on his wit, he dazeled the eyes of the most Learned: if you behold his innocency, his life was as a Pearl without blemish; if you weigh his dignity, he had been three times Consul of Rome: if you enquire after his Negotiations and Government, you shall finde he lived in the greatest revolutions of the Roman Empire, when affairs were most thorny. If you will observe his constancy, you shall see a pillar of Diamond not to be shaken with all the counterbuffs of iniquity: and if a brave death may set a seal upon a good life, you will be enforced to admire him, beholding him to dye on a Scaffold, for the defence of piety and justice, which are the two Poles that suppot all the great Policy of this Universe. (p. 277)

The text on the image reads, “ANIC. MANL. TORQVAT. SEVER. BOETIVS” and maybe someone good at Latin will help me with it.