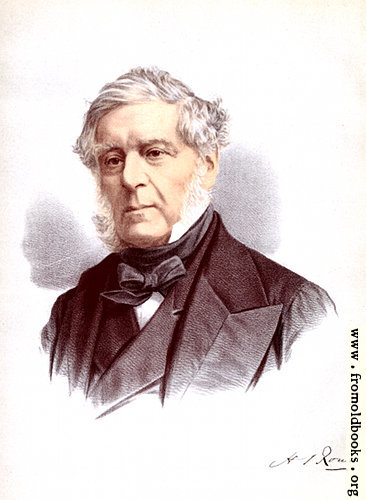 Henry John Routhe second son of the first Earl of Stradbroke, by his second wife, Charlotte Maria, daughter of A. Whittaker, Esq., was born at Henham Hall, Suffolk, on hte 23rd of January, 1795. He served as midshipman on the Repulse, later on the Victory (Nelson’s ship), and from 1812 to 1814 in the Bacchante under Sir William Hoste. He continued to distinguish himself, defetaing pirates and escaping shipwreck.

After retiring, Rous became associated with horse-racing and the governance of that sport. He wrote “Laws and Practice of Horse-Racing” which, at the time at least, was the primary reference on the subject. He died in 1877.

The portrait is described as “copied, by permission, from a Photograph by the Messrs. Fradelle and Marshall, Regent Street.”