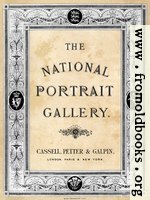 
The title page appears at first quite ordinary, but on closer inspection is in fact very startling. The reason is that the yellow colour has been printed! To be sure there is also foxing and browning, but the intricate Victorian engraved border has a plain white background, and also the capital letters in “The National Portrait Gallery” have white [...] [more...] [$] 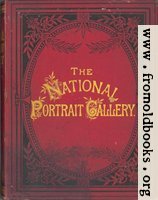 
The front cover of this thinnish volume is red, with a black Victorian floral border and ornate gold lettering. [$]