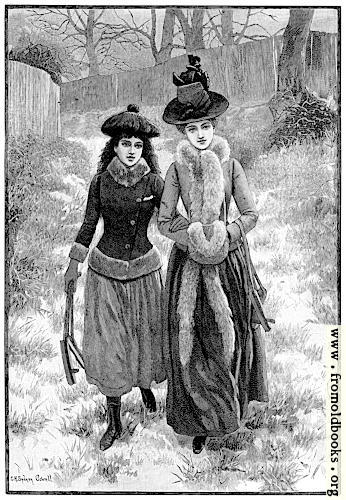 two women, wearing winter boots, furs, bonnets, walk arm in arm together over snowy grass. They carry skates. In the background are wooden fences and trees.

The illustration was made for “Colonel Stormer’s Mistake (The Chronicles of Cardewe Manor)” by Mrs. Martyn-Henry.

Miss Fallutine, dressed in becoming costume, declined the escort of both gentlemen, and preferred to walk down the lane with Emily Cardewe, who was one of her aunt’s guests. She was a nice quiet girl, and had taken quite a fancy to the vivaceous American girl. (p. 162)

The picture is signed G. H. Sidney Cowell. No credit is given to the engraver.