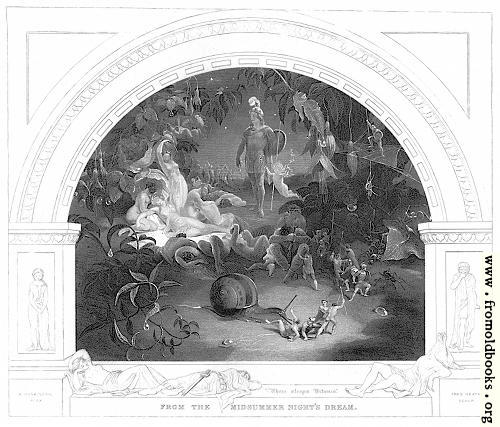 Shakespeare, William: “The Works of Shakspere, with notes by Charles Knight” (1873)

The engraving shows Titania as a nearly-naked woman with a tiara of pearls, surrounded by her female maids-in-waiting. In the foreground, tiny soldiers, mostly naked (and I think all barefoot) brandish spears and swords at a snail and some spiders. At right of centre, a man sits with his head in his hands, holding a staff or possibly a musket, and naked except for rings or shackles around his ankles. In the background, a knight approaches, led by a cherub. This could be Oberon (“Well-met by moonlight, proud Titania!”) or one of the other characters in the play wandering past, love-besotted as a result of puck’s potions.

The centre part of the engraving (described above) is framed with an architectural sketch, around and within which are various of the mortal charactes from the play, including (lower right) Bottom, an almost-naked man with the head of a donkey (a were-donkey, as it were).

There is also a detail of this image taken from the centre, showing the engraving lines.

The painting from which this engraving was made was exhibited in 1847; the birth-date for Robert Huskisson is approximate, taken from the Tate gallery.