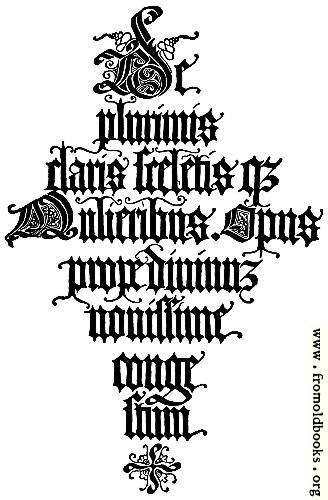 The examples of old lettering reproduced in figures 147, 148 and 149, together with the drawings by Mr. Goodhue, will indicate the proper spacing of Blackletter; but in most of the pages here devoted to illustrating the individual forms the letters have been spaced too wide for their proper effect [so] that each separate shape may be shown distinctly.

The style appears at its best in compositions which fill a panel of more or less geometrical form, as, for example, the beautiful title-page reproduced in [figure] 147. Could anything be more delightful to the eye than its rich blackness, energetic lines, and refreshingvirility? In this design surely we have a specimen that, from the proportion and balance of its blacks, is more effective than anything which could have been accomplished by the use of the more righid Roman letter; but despite its many beauties it suffers from the inherent weakness of the individual letter forms,—it is more effective than readable!” (p. 136)

The blackletter script calligraphy shown here is printed rather than hand-lettered. The Library of Congress in America has a copy of this book in the Rosenwald collection, where it is manuscript 03230.

The original title page presumably had a lot of white space around the lettering, although I can’t tell from the reproduction in this book.