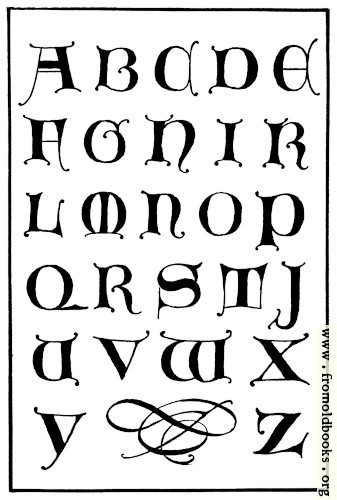 When the Gothic Uncial capitals were cut in stone and marble there was naturally a corresponding change in character, as is shown in the Italian examples illustrated in 160 and 161. These examples, which are reproduced from rubbings, exhibit the characteristic stone cut forms very clearly. A Gothic Uncial alphabet redrawn from a German brass is illustrated in 162. The group of specimens from 154 to 159 exhibit the chronological growth of the Uncial capitals, which were used, as has been said, with the various small Blackletter forms, though they were also used alone to form words, as is shown in 160. The historical progression in these Uncial examples is most interesting; and, allowing for the variations of national temperament, traces itself connectedly enough. Figures 154 to 159 are pen forms, while 160 to 163 are from stone or metal-cut letters. (pp. 139 – 140)

The mediæval penman’s calligraphic flourish is also available as a separate image.