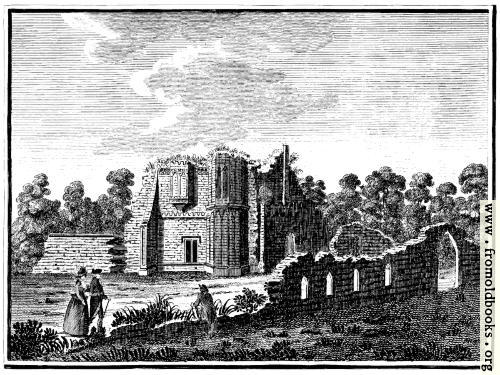 Boswell, Henry: “The Antiquities of England and Wales” (1786)

Ramsey Abbey was a Benedictine abbey founded in 969; it was closed at the Dissolution of the Monasteries, and the stone was later used to build a number of Cambridge colleges. Today, part of what is left of the Abbey forms part of Abbey College, a school. This 1786 engraving shows the buildings in an advanced state of ruin. To give scale to the drawing, a lady and gentleman stroll the grounds; they are dressed in costumes of the period when the drawing was made (late 18th century).

Note: Ramsey was historically part of Huntingdonshire; it still would be, except that Huntingdonshire was alamgamated with Cambridgeshire. The engraver has signed the plate Hawkins, and we are to assume that the engraving is by Boswell himself, although so far as I can tell they are all copies of earlier engravings by Francis Grose.