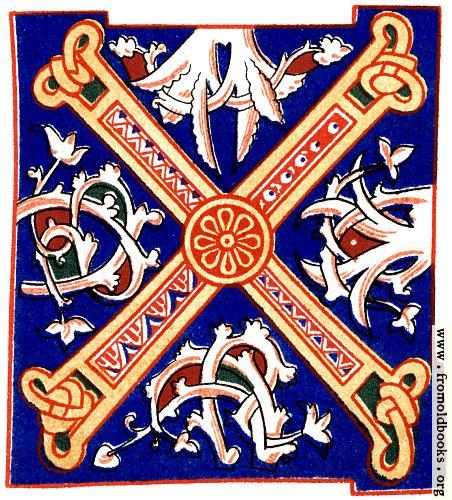 A beautiful rich red letter X on a deep blue background, with a delicate peach fill. This is reproduced (in the book) from an 11th century hand-illuminated manuscript, along with comments that suggest the author didn’t like the colours!

From the British Museum MSS., Harleian collection. No. 7,183; consisting of a selection of passages in Latin from the New Testament, exhibits a clearly transitional style of ornament from the Anglo-Saxon, to that which is generally known in architecture as pure Romanesque. The intricate interlacings of the former style are still retained; but a distinct recognition of the principle of foliation derived rather direct from nature than through the antique, is also evidenced. The colours are inharmonious, and the work is apparently German. (p. 100)