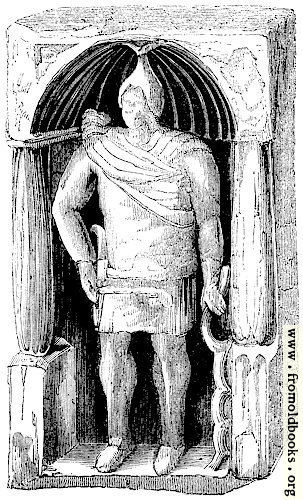 In the 18th and 19th centuries there was a lot of speculation about Hadrian’s Wall, and people thought parts of it must have been the remains of some large city; you can see some of that confusion in the following text, I think. Fig. 136 is an engraving of a statue of a Roman soldier standing in a stone niche or alcove.

Gibson, who surveyed a portion of the Wall [of Hadrian and Severus] in 1708, here saw seven or eight Roman altars which had been recently dug up, and a great number of statues. Alexander Gordon, whose ‘Itinerarium Septentrionale’ was published in 1726, describes House-steads, “so named from the marks of old Roman buildings still appearing on that ground,” as “unquestionably the most remarkable and magnificent Roman station in the whole island of Britain.” He says, amidst his minute descriptions of statues and altars, “It is hardly credible what a number of august remains of the Roman grandeur is to be seen here to this day; seeing in every place where one casts his eye there is some curious Roman antiquity to be seen, either the marks of streets and temples in ruins, or inscriptions, broken pillars, statues, and other pieces of sculpture, all scattered along this ground.” When Hutton surveyed the Wall, he found one solitary house upon the site of the Roman City; and in this lone dwelling a Roman altar, complete as in the day the workman left it, formed the jamb which supported the mantel-piece, “one solid stone, four feet high, two broad, and one thick.” The gossiping antiquary grows rhetorical amidst the remains of Borcovicus:—“It is not easy to survey these important ruins without a sigh; a place once of the greatest activity, but now a solitary desert: instead of the human voice is heard nothing but the wind.” Some of the statues and inscriptions found at House-steads and other parts of the Roman Wall now form a portion of the beautiful collection of Roman antiquities in the Newcastle Museum (Figs. 133, 134, 135, and 136). Of these the Roman soldiers and the Victory are rudely engraved in Gordon’s book. (p. 43)