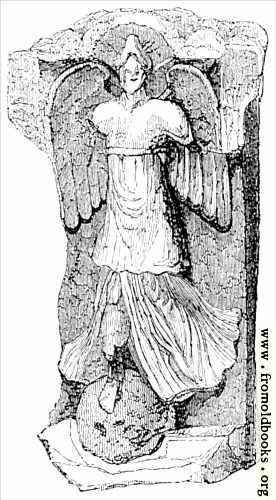 Victory, or more properly Victoria, was a Roman goddess personifying victory, including victory after war. Depictions (in painting, sculpture, coins, and elswhere) of Victoria with wings, such as this one, were called vicories, and, representing the idea or spirpit of victory, may have given rise to, or more likely merged with, the concept of Christian angels.

The example in this image is from a Roman statue that was found at Housesteads Fort in Northumberland, UK. A winged figure (presumably female) faces us with one foot resting on what I take to be a circular shield, presumably of a vanquished enemy. The statue is carved from a larger piece of stone, so that there is a flat back, but I don’t know whether it was originally part of a tomb or building.