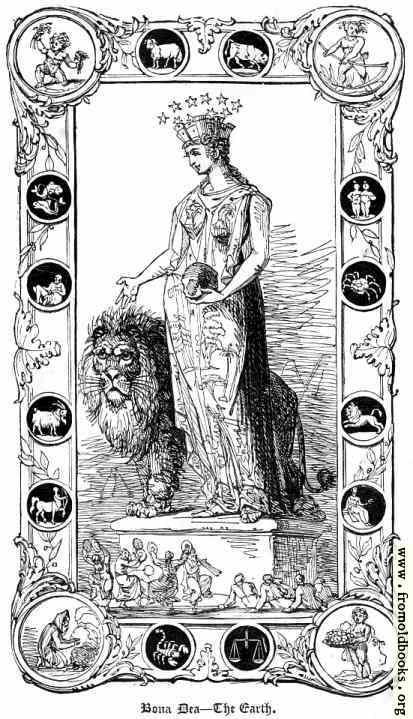 Earth is represented as a woman with twelve stars forming a halo around the crown on her head, and a lion beside her. She is crowned with the stars! She is depicted inside a picture frame at whose corners are the four seasons and scattered between are the signs of the zodiac. At her feet are people sitting on the ground, and others dancing with pipes and cymbals.

Lady Jaxraven made a Photoshop brush from parts of this image.

Under the female form the ancients worshipped the Earth. They called her “bona Dea,” or the “Good Goddess,” by way of excellency, and that, for the best reason in the world, because “there is no being that does men more good.” In respect to her chastity, all men were forbidden to be present at her worship; the high priest himself, in whose house it was performed, and who was the chief minister in all others, not excepted. Cicero imputed to Clodius as a crime that he had entered the sacred fane in disguise, and by his presence polluted the mysteries of the Good Goddess. The Roman ladies offered sacrifices to her through the wife of the high priest, and virgins consecrated to the purpose.

The Earth, Bona Dea, or the “Good Goddess,” was represented under the form of a matron with her right hand opened, as if tendering assistance to the helpless, and holding a loaf in her left hand. She was also venerated under the name of Ops, and other denominations, but with the highest attributes; and when so designated, she was worshipped by men and boys, as well as women and virgins; and priests ministered to her in dances with brazen cymbals. These motions signified that the Earth only imparted blessings upon being constantly moved; and as brass was discovered before iron, the cymbals were composed of that metal to indicate her antiquity. The worshippers seated themselves on the ground, and the posture of devotion was bending forward, and touching the ground with the right hand. On the head of the goddess was placed a crown of towers, denoting strength, and [that] they were to be worn by those who persevered.

To all “of the earth” not wholly “earthy,” the Earth seemed a fit subject to picture under its ancient symbol: and, in a robe of arable and foliage, set in a goodly frame of the celestial signs, with the seasons “as they roll,” it will be offered as a frontispiece to the present volume, and accompany the title-page with the indexes in the next sheet.” (p. 1655)