Cells at town hall, Boston, England, where the Pilgrim Fathers were confineddetails 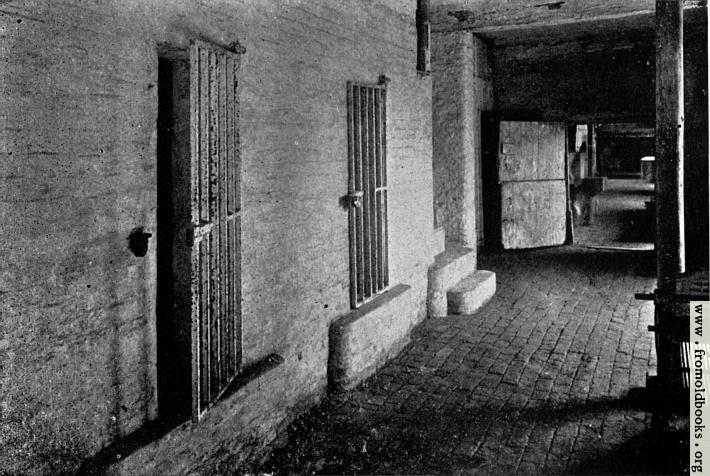 Cells at town hall, Boston, England, where the Pilgrim Fathers were confined, in Boston,Lincolnshire,England more

Cells at town hall, Boston, England, where the Pilgrim Fathers were confined

A photograph of a prison, jail or gaol, showing the iron bars of open cell doors. According to the extract from the book that follows, the “Pilgrim Fathers” (a group of Puritans, a sort of fanatical and intolerant Christian religious sect that was also associated with the Civil War in England) were arrested trying to leave the country, stripped, publicly humiliated, and then imprisoned here, in Boston, in Lincolnshire. This is not, of course, the Boston in the USA. I also made a wallpaper version of this image, for use as a computer desktop background if you are of a dismal disposition.

“The failure of the first attempt of the Pilgrims to reach the Low Countries [[Holland, or the Netherlands]] has been simply and graphically related by Govenor Bradford. “There was,” he said, “a large company of them [the Puritans] purposed to get passage at Boston in Lincoln-shire, and for that end had hired a shipe wholy to them mselves, & made agreement with the maister to be ready at a certaine day, and to take them and their goods in, at a conveniente place, wher they accordingly would all attende [[i.e. wait]] in readiness. So after long waiting, & large expences, though he kepte not a day with them, yet he came at length & tooke them in, in ye night. But when he had them & their goods abord, he betrayed them, haveing before hand complotted with ye searchers & other officers so to doe; who tooke them, and put them into open boats, & ther rifled & ransacked them, searching them to their shirts for money, yea, even ye women furder than became modestie; and then carried them back into ye towne, & made them a spectackle and wonder to ye multitude, which came flocking on all sids to behould them. Being thus first, by the chatpoule officers, rifled & stripte of their money, books, and much other goods, they were presented to ye magistrates, and messengers sente to informe ye lords of ye cousell of them; and so they were comited to ward.” (Bradford’s “History of Plymouth Plantation.”)

After a month’s imprisonment in the jail at Boston [in England] the fugitives were released, although some of the leaders of the company were kept in durance until the assizes, among them Brewster and Bradford. They were, while in prison, treated with humanity and even courtesy, which may have been due to the fact that Boston was the home of a number of Nonconformists. In the spring many of the Puritans, who had failed in their first attempt, embarked upon a Dutch vessel at Grimsby Common, near the mouth of the Humber. Even then they were not permitted to depart from the shores of England in peace, as some government officials, having got word of their intention, surprised them at night, when only half the company was on board, and ruthlessly separated wives from their husbands and children from their parents. Thus at the sailing of the ship a number were left behind; among these were Brewster, Robinson and other leaders of the company, “who had stayed to help the weakest over before them.” These stranded Pilgrims went over at a later date, singly and by separate routes; and by August of the same year, 1608, the entire congregation, numbering about one hundred, found themselves safe in the haven where they would [[i.e wanted to ]] be.” (pp. 46 – 48)

Thanks for the perfect image for my insurgents day 2007 greeting!

I’ve gotten many e-mails from such an accidentally funny posting. Thanks for providing these images :)