One of the dark cellsdetails 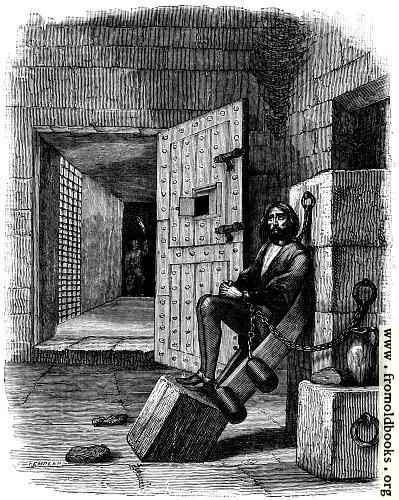 One of the dark cells, in Vincelles, Jura, France more

One of the dark cells

From a contemporary sketch.

Depicting a cell in the dark and feared dungeon of Vincelles, some time between the 16th century and 18th century. The prisoner sits glumly on a rather uncomfortable-looking chair, with his feet secured at the ankle and his hands at the wrist by iron manacles chained to a heavy metal ring set into the stone wall; a metal collar round his neck is fastened by a short chain to another ring in the wall. Behind him is a jug, probably of water, and half a loaf of dry bread. On the floor of his prison cell are perhaps his shoes and cap. The cell door stands open: it is heavy and studded, with two very large bolts to secure it and a small window for inspection. Behind it stretches a corridor and, at the far end of that, a man carrying a bucket and a sword held aloft. (or perhaps a torch?) One wonders if he is an executioner or a torturer.

The picture is signed “Kemplen.”