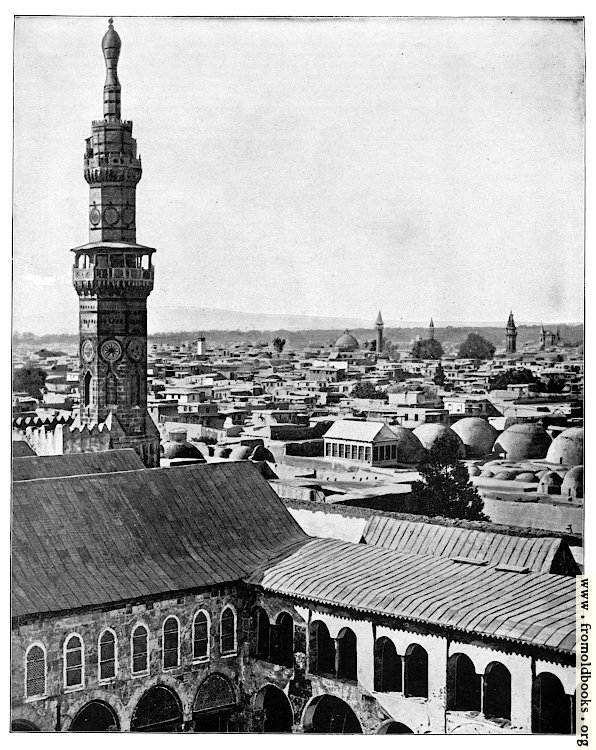 In this vintage photograph from 1893 or so, we see the rooftops of a city: domes, mosques with their minaret towers (one in the left foreground), and, at front, a building with cloistered walks on two levels. The description in the book seems sexist and racist to the modern reader; the last sentence is from a later edition and not present in the one here, but i have included it as it slightly moderates the shock of the sentence before it.

The Arabs have long regarded Damascus as a foretaste of Paradise, and have called it exultantly “The joy of the whole earth.” In fact to the followers of Mahomet, emerging from the deserts of Arabia, this must have seemed to them the Garden of the Gods. The Roman Emperor, Julian, called it the Eye of the East. Persian and Arabic poets have sung of its beauty in rapturous strains. It appears in the distance like an oasis of dense, luxuriant foliage, from which rise scores of bulbous domes and glittering minarets. Like all Oriental cities, it proves somewhat disenchanting upon close inspection, but its fountains, its stately trees, its air laden with the perfume of unnumbered gardens, its mosques, and its marvelous bazaars—all these together make Damascus the rival of Cairo, a place where the jeweled portals of the Orient open wide before us, and all our anticipations of the east are realized. Even the houses, which appear plain and unattractive without, contain apartments of great luxury, with marble-paved courtyards and a profusion of rare flowers, graceful fountains, rich Syrian tapestries, and soft divans upon which rest in voluptuous languor some Eastern women, lulled by the murmur of melodious fountains into that dreamy repose so dear to all inhabitants of the Orient. Damascus is one of the oldest cities in the world; so old, that it is useless to try to recount its history here. It has seen many masters. Faith after faith has flourished here, from that of Jove to that of Mahomet. It has lain for ages like a lovely slave in the market-place contended for by wrangling rivals. For it has always had to a remarkable degree the “fatal gift of beauty.” (p.115)