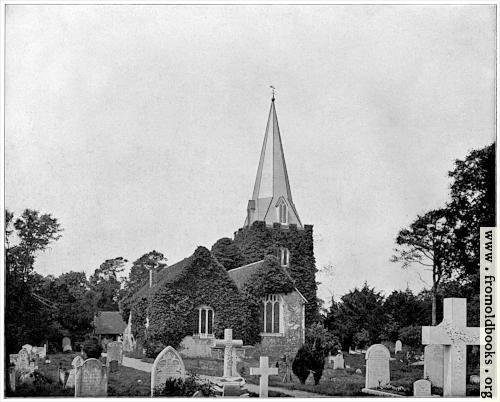 An English country churchyard, with uneven monuments, and a medieval church with ivy-covered walls and a spire.

The extract from Thomas Gray’s poem given here (Elegy in a Country Churchyard) is only a small fragment of the work.

To this lovely churchyard the matchless “Elegy” by Gray has given an immortal charm. The place has altered little since the pet’s time, save that “yon ivy-mantled tower,” which he described is now surmounted by a modern spire. It seems unsuited to the place, and the ivy (while clinging lovingly to the old wall) avoids the spire as if it were a strange intruder. But this aside, the place is as it was when the poet lingered here at sunset, as “The curfew tolled the knell of parting day!” Beneath its oriel window rich with ivy is the poet’s grave. What an ideal reseting-place for one who has identified his name forever with its peaveful beauty! Standing here what added significance are given to his lines:

“Beneath those rugged elms, that yew-tree’s shade,

Where heaves the turf in many a mouldering heap,

Each in his narrow cell forever laid,

The rude forefathers of the hamlet sleep.

“Perhaps in this neglected spot is laid

Some heart once pregnant with celestial fire;

Hands, that the rod of empire might have sway’d,

Or wak’d to ecstasy the living lyre:

“Full many a gem of purest ray serene

Full many a flower is born to blush unseen,

And waste its sweetness on the desert air.”