The Order of the Inspirati.details 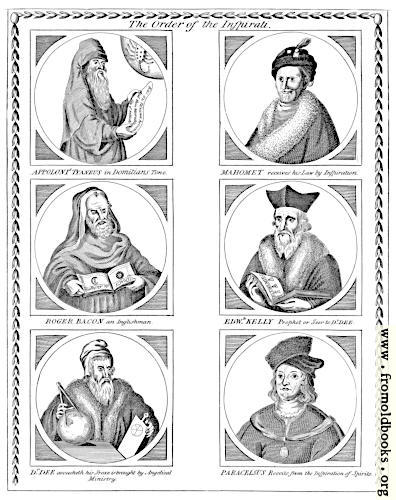 The Order of the Inspirati. more

The Order of the Inspirati.

The Order of the Inspirati.

Dr. Dee avoucheth his Stone is brought by Angelical Ministry.

Paracelsus Receits from the Inspiration of Spirits.

The picture is signed by the engraver, Ames, Sculp., Bristol, and labeled at upper right No. 35. There is a typogrpaphic border on left, top, right, or repeated leaves.

On the “Order of the Inspirati” I found the following from the description of an academic paper by Dr. Des. Berit Wagner from Kunstgeschichtliches Institut der Goethe Universität Frankfurt:

In the 15th century, scholars, patrons and artists (re-)introduced the hermetic tradition and with that the Order of the inspirati into European thought. Even in the southern Netherlands, especially in Antwerp, esoteric literature was studied and printed very often.

Nevertheless, with the counter-reformation in Antwerp there were frequent bans, and legal processes against these philosophical-religious currents. A famous process took place against the painter Otto van Veen, teacher of Pieter Paul Rubens.

Cambridge Centre for the study of Western Esotericism, 2009

The term, The Order of the Inspirati appears to have been invented by Méric Florence Estienne Casaubon (1559 – 1671), or at least first used by him in print, in his edition of the Journals of John Dee; it’s a derogatory term best translated as Order of Fanatics. Casaubon believed Dee had been led astray by devils, publishing Dee’s writings to prove that devils were real. Casaubon included a version of this present engraving in his book (1655?); the engraving was re-made for Sibly’s book here, and has circular portrait frames rather than square but is otherwise very close in detail.

The border of leaves is available as a separate image.