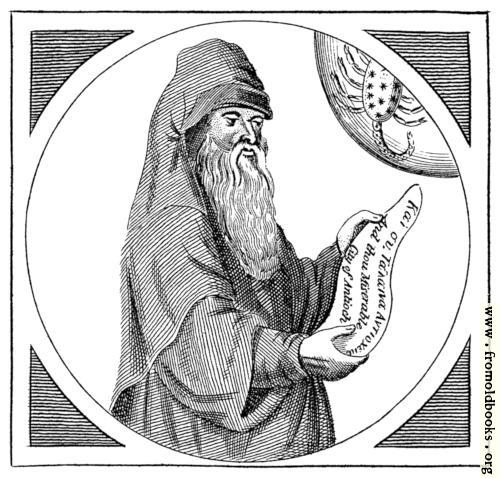 This fanciful portrait of the Greek philosopher Appollonius shows him with a long beard. He stands next to a heavenly sphere with part of Scorpio visible both as a constellation of stars and as a scorpion. In his hand is a scroll with text in Greek, Καί σὺ τάλαινα Άντιόχεια and in English, “And thou, miserable city of Antioch.”

The text of the scroll refers to a prophecy that Apollonius made when asked by the citizens to restore a pillar with protection from eathquakes:

“And thou, miserable City of Antioch, shalt suffer twice, and a third time shall come upon thee, wherein thou shalt be consumed by fire even in that part by which Orontes runneth. And it may be thou shalt suffer once more.”

The corresponding text in the book is as follows:

Appollonius Tayaneus, in the time of the Emperor Domitian, from the wonderful and miraculous things he did through the agency of spirits, added to so great an appearance of sanctity and simplicity, with which his exterior was endowed by nature, occasioned all ranks of people to regard him with a mixture of reverential awe and respect. Even the Christians, who lived within the circle of his fame, thought him something more than human, and looked up to him with confidence and esteem. From a variety of circumstances, and accounts in different authors, it appears that this singular character had not only the faculty of knowing what was transacting at many hundred miles distance, but had the means also of being conveyed almoft instantaneously from one place to another, where he was seen, known, and conversed with many of his acquaintance. It is also recorded of him, that, at the instant the Emperor Domitian was assassinated at Rome, he spoke of it in a public assembly at Ephesus, and declared the mode and manner of his death; which, upon enquiry, was found to happen at the precise moment of time he spoke of it, and in the exact manner he had described. (p. 1098)