The Pied Piper of Hamelindetails 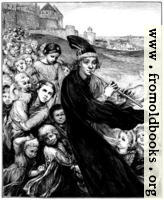 The Pied Piper of Hamelin

Scudder, Horace Elisha: “Doings of the Bodley Family in Town and Country” (1876)

The pied piper of Hamelin (or Hameln in German) doesn’t look very pied; that is, his cloak isn’t made from two colours.

In the story, the piper is called to rid the town of rats, which he does by charming them away with his flute, a method about as effetive as most others, I suspect. Then when the city won’t pay him, he charms away all of the children; the townspeople, instead of being grateful to him, are upset, and eventually pay him to get their children back. It’s an old story of extortion and abduction!

The piper here is a young man wearing a fur-lined hat and a cloak that flutters in the breeze; he plays a recorder, and is followed by many children. In the background the city walls.