Miniature painting of a portrait artist with easeldetails 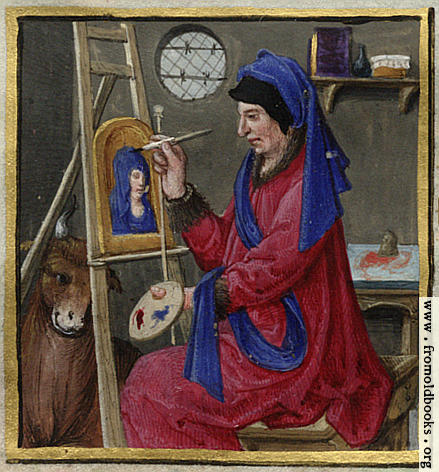 Miniature painting of a portrait artist with easel more

Miniature painting of a portrait artist with easel

A Mediæval (OK, Medieval in America) miniature painting taken from a Latin book of hours. The artist is wearing a red gown and a blue hood and stole or scarf. He is painting a woman, holding his brush up against the canvas—or against the wood on which he paints—which is held upright on an easel. He holds a pallette in his left hand. Behind the easel a smiling ox is crouching. The artist sites in a small room with a round window with diamond-shaped leaded glass; there is also a shelf on the wall holding a book and some other items.

The ox may be an indication that the painting is of the Virgin Mary, since this was a papist painting. But I am no expert and cannot be certain.

Update: the picture depicts Saint Luke painting the Virgin Mary. St. Luke’s symbol is the ox, and he was popularly believed to have been a painter and to have painted a portrait of the Virgin Mary (some Russian and Greek Icons are believed by pious Orthodox believers to be copies of this painting). He’s painting the Virgin; you can tell because the woman in the painting wears a blue mantle, and blue is the color of the Virgin. Thanks again to Rebecca Klingbeil for the interpretation.

This image was on image 15 of the Library of Congress page images.