Moroccan red leather with gold tooling; highly stylized acanthus leaves make an intricate and ornate foliated border round the edge of the front cover of this book. [...] [more...] [$] 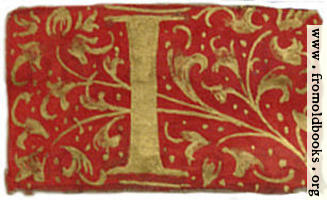 Letter “I” from 16th century book of hours


The letter I painted in red and gold used as a decorative initial. This is what in calligraphy today is called a built-up letter, made with multiple pen or brush strokes. However, it was then gilded with gold. [more...] [$]

Painted miniature: a writer, with a castle in the background


I suspect this is a complex emblem painting. A man with long curly hair sits barefoot on the grass, wearing a blue robe and with a red and gold cloak on his lap. He gazes heavenward for inspiration, pen poised in one hand and book in his lap. A bird stands to his left, and in his background is a castle on a cliff, overlooking the shore. An angel [...] [more...] [$] 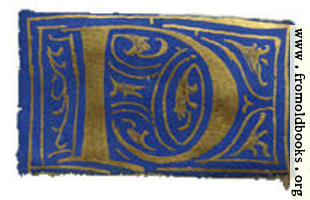 
The letter D painted in blue and gold used as a decorative initial.

This image was on image 15 of the Library of Congress page images. [$] 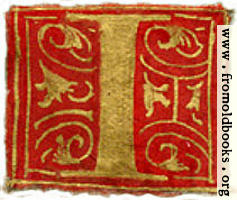 Letter “I” from 16th century book of hours


The letter I painted in blue and gold used as a decorative initial.

This image was on image 15 of the Library of Congress page images. [$] 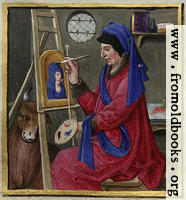 Miniature painting of a portrait artist with easel


A Mediæval (OK, Medieval in America) miniature painting taken from a Latin book of hours. The artist is wearing a red gown and a blue hood and stole or scarf. He is painting a woman, holding his brush up against the canvas—or against the wood on which he paints—which is held upright on an easel. He holds a pallette in his left hand. Behind the easel [...] [more...] [$] 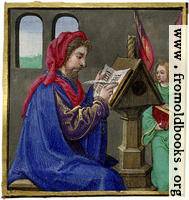 Miniature painting of a scribe writing at a desk


A Mediæval (OK, Medieval in America) miniature painting taken from a Latin book of hours. A bearded scribe uses a quill pen to write in a book that rests on a wooden writing desk. He wears a blue gown and a red hood. In the background a winged angel wearing green sits clutching a large red book. Arched windows in [...] [more...] [$] 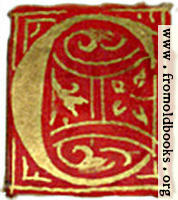 
The letter C painted in red and gold used as a decorative initial.

This image was on image 16 of the Library of Congress page images. [$] 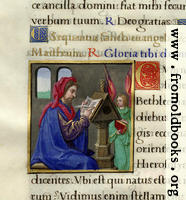 
A fragment of a hand-written page of calligraphy from the late mediæval period—or from the Rennaissance, one might say, and made well after printing was [...] [more...] [$] 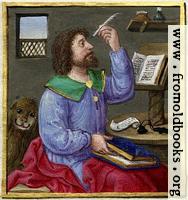 
A bearded man, perhaps in his thirties or forties, sits holding a book in his lap; to his left is a writing stand with an open manuscript; he holds a quill pen to his eye. There is a lion behind him, indicating that this is Mark, the supposed author of Mark’s Gospel. Mark the Apostle, of course, would [...] [more...] [$] 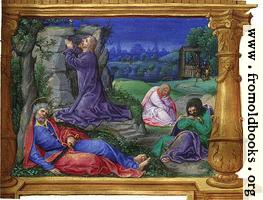 
The disciples of Jesus sleep while Jesus prays, “let this cup be taken from me,” although since they were asleep no-one actually heard his prayer. The disciples are depicted as caucasian men with bare feet and halos, and the identity of the scene is confirmed by the small symbolic cup [...] [more...] [$]