Bougie and the Atlas Mountainsdetails 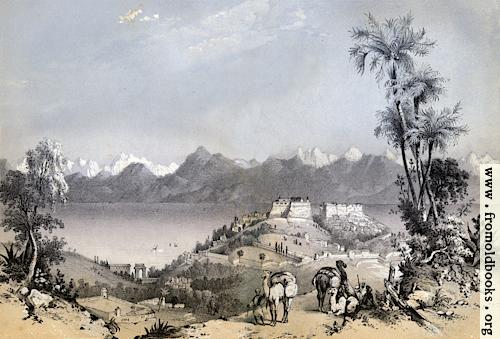 Bougie and the Atlas Mountains, in Béjaïa, Algeria more

Bougie and the Atlas Mountains

Pulszky, Ferenc Aurelius: “The Tricolor on the Atlas; Algeria and the French Conquest” (1855)

This stunning and beautiful chromolithograph shows a view of a small town in Algiers, with the Atlas Mountains in the background. The engraving is captioned Bougie and the Atlas Mountains; the modern name for Bougie is Béjaïa. neither place is mentioned in the text except for the engraving as far as I can tell, but the text I’ve extracted below might apply, as it’s from the surrounding pages.

Hâji-Bukhari received us in the most courteous manner; but when I requested permission to visit the thermal springs of Hammam-Sidi-Ben-Hanefiah, he gave an evasive answer, and offered to have the water brought to Mascara for our examination.

After an interval of a week, I tried again to get permission for an excursion to the thermal springs. The Governor of Mascara sat in the hall of justice among his clerks and beadles: he seemed to be in bad temper, and did not invite me to sit down; but I took my place opposite to him on his mat, and we had the following conversation:—

“You have,” said I, “promised me an escort and a guide whenever I might intend to visit some more distant points. I come now to ask a guide to Hammam-Sidi-Hanefiah.”

“What are you to do at the springs?” asked Bukhari, without deigning to look at me.

“I wish to get water of the spring; its virtue has been praised to me. We have several sick people in Oran, for whom it might be health-restoring.”

“I will spare you the long journey, which leads over stones and precipices. You could not return to day. My beadles will fetch as much of the water as you may require.”

“It would not be of any avail to me; I must try its virtue while it is still hot, and at the spring itself.”

“You cannot be allowed to approach the spring. A Marabut lies buried there, who did not like the Rummis. He would send a disease on you, and your patients might drink death instead of health.”

“I respect the Marabuts. I know they are pious men, who deserve your love by their wisdom, their exemplary life, and their conciliating spirit. The Christians, returning from captivity, mention them with gratitude, as they always found in them defenders against the outrages of your warriors. I cannot believe that a saint, for whose remains I have profound reverence, could harm me.”

“The Marabut might spare you,” said the chief, after some minutes, “but your companions would surely fall under his curse.”

“Yet they are ready to try their good-luck; if they fare ill, you have no responsibility.”

“But the Consul is my friend, and I cannot allow that he should go anywhere where he might be endangered.”

Seeing that distrust was the principal reason of all the difficulties, I shifted the ground. “You know,” said I, “that I am not a Frenchman, but a German. I do not care for your affairs: my people has never warred with yours, and the Sultan of the Germans is a good friend to the Padishah in Constantinople.”

Haji Bukhari interrupted me, saying, “It is quite the same whether you are German or French: we have made peace with the French, and we do not deny to them what we would grant to another Rummi.”

After some more discussion, Bukhari consented to have me conducted half-way to the springs, from whence any Arab might fetch the water. Having gained this point, the Consul, his brother, Dr. Varnier, our dragoman and I, set out immediately. Our guide was a young man, and we hoped he might not be inaccessible to a bribe. Our horses carried us rapidly across the plain of Egghres, which is about sixty miles long, and twelve wide. It is the territory of the Hashems, who have tilled about one-half of it, as it is uncommonly well suited for wheat. No swamps here pollute the air; it is healthy throughout, but not so well watered as the plain of the Sig to the north. The Hashems, therefore, go with their flocks in spring regularly to the north, and return only at harvest to that excellent wheat land.

We had soon reached the spot whither the governor had ordered our guide to conduct us: but he refused to lead us further onward. I was prepared for that, and gave him two Spanish dollars, with the promise of a like sum when we returned from the spring. He weighed the money in his hand, requested me to repeat the promise, and said then resolutely, “Ten boojoos! I don’t care if now the Governor bastinades me.”

After a ride of two hours along mountain paths, we reached a broad valley, surrounded by high and well-timbered mountains, and studded with Arab tombstones. Soon we saw the white Marabut sepulchre, and the Talebs rushing out of the hermitage, and reproaching the guide for having led Christians to the holy spot: they declared they would not permit us to go to the spring. I promised money to their chief, but he rejected the offer indignantly. It would have been very disagreeable to fail so near the goal. I therefore drew several dollars out of my pocket, and showed them to him: he refused them a second time, but his glance was riveted to the silver; and when I was about to pocket them again, the saintly man snatched them from my hand and led me towards the mosque, on condition that my companions did not follow. The thermal spring here runs from the rock into a basin about five feet in circumference, which formerly must have been much larger, as it is filled with a lime-sediment, which sooner or later will obstruct the spring. But the deposits of carbonate of lime are far from being so considerable as at Hammam-Meskhutin. The water is likewise much scantier than at those splendid springs: the temperature of this was 65° Reaumur. I had scarcely time to fill my jugs and bottles, when the Taleb judgedIT had seen enough for my two dollars; but how surprised and angry was he, when, turning round, he found that all my companions had followed us silently, and were here on the forbidden ground. He requested us to hasten away. We asked him some questions about the neighbourhood, and he told us that there were other five similar springs in the valley, but not so hot as these of Hammam-Hanefiah. In another valley, he said, there were old ruins, great temples, rows of columns, and many inscriptions; probably the ruins of Victoria, a colony mentioned by Ptolemy. After having admired the splendid scenery of the valley, which had been selected for a cemetery by the Arab tribes around, we retraced our steps to Mascara. (p. 120)