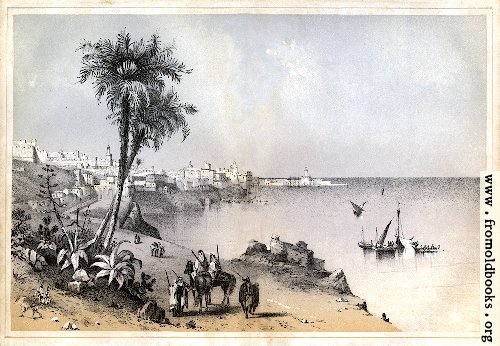 Pulszky, Ferenc Aurelius: “The Tricolor on the Atlas; Algeria and the French Conquest” (1855)

The view, delicately coloured in pastel blues, pinks and yellow brown, shows in thr foreground a group of people on a beach. Two of the people are riding horses; another walks barefoot; they are perhaps wearing Moorish clothing. There’s a palm tree behind them and, behind that, the sity of Algiers with its white buildings. To the right stretches a calm sea with sailing boats.

The city has a triangular form and The harbour [of Algiers] is small, scarcely affording shelter to thirty ships; but its depth is sufficient for middle sized men-of-war. A fyke thrown into the sea, and running for 300 feet from west to east, protected the ships against the surf of the sea. The French have continued this dyke ever since 1830, and the harbour is now large enough or the requirements of trade. The populaion of Algiers—French troops not included—was in 1839, estimated to be 28,000: 9000 Moors, 6000 Jews, 5000 natives of the interior, Arabs, Kabyles, Biskaris, and Mozabites, and 8000 Europeans. (p. 9)