Agra Palace and part of wall and gateway to the fort.details 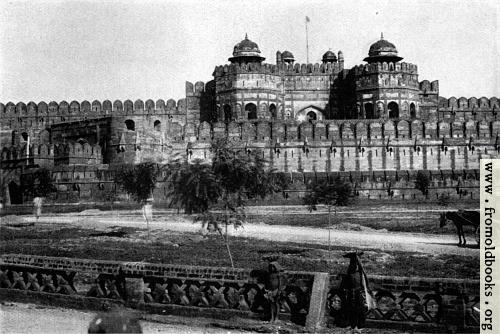 Agra Palace and part of wall and gateway to the fort., in Agra, India more

While the centre of attraction in Agra is the Taj Mahal, the fort, palace, and Moti Musjid (Pearl Mosque) are of equal interest. here we see the impress of three rulers, Akbar (the grandson of the noted Mogul king, Baber, and son of Humauyn, both of whom lived at Agra), Jahangir, his son, and Shah Jahan, his grandson.

Akbar removed to Agra, from the old capital Dteb-Fatehpur-Sikri, about 1568, but the only monuments that are now attributed to him are the massive walls of the fort and the red palace. (pp. 71, 72)