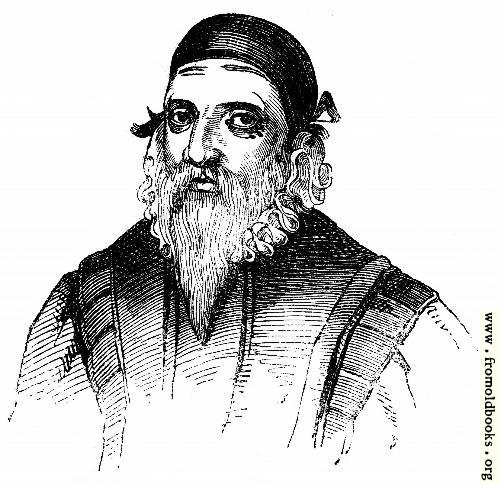 The most eminent of the names intimately connected with astrology, in modern [1840s] times at least, is that of John Dee (Fig. 2155), a man of remarkable ability and learning, who at the age of twenty made a tour on the Continent for the purpose—unusual with persons of his age—of holding scientific converse with the most eminent European scholars. In 1543 he was made a fellow of Trinity College, Cambridge, just then founded by Henry VIII.; but, five years later, we find him entering into a kind of voluntary exile, by a second Continent expedition, caused by suspicions he had excited at home of his dealings in the Black Art, in which term, however, all kinds of legitimate studies that the vulgar could not understand were included. Dee, for instance, was an able astronomer and a skilful mechanician; and these attainments alone, had he not been an astrologer also, would have sufficed to have made him one in the eyes of the world of England in the sixteenth century.” (p. 218)