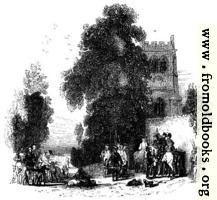 There was one sport exclusively confined to the noble and wealthy orders of society—hawking—which chiefly flourished and declined during the present period [the first half of the 17th century]. To a people who found habitually much more of pleasure than of pain or annoyance in the overcoming of difficulties, and who retaine dmuch of what our phrenologiests would call the destructive principle, no sport could be more attractive than this, especially when it comprised the additional gratification of a splendid spectacle. The meeting of gallants and ladies (Fig. 1788) afforded an admirable opportunity for the exhibition of fine dress. The galloping over hill and dale in the invigorating breeze, and amid country scenery, was highly exhiliarating and delightful; and the many daring and dexterous feats which had to be accomplished, in order to follow the course of the hawk and its prey during the aërial chase and combat, gave full exercise to courage and energy. The sport required no less resolution when followed on foot: with the aid of a hawking-pole desperate leaps were taken over hedge and ditch. In making one of these leaps Henry VIII. nearly perished; his hwaking-pole broke, he fell short in the mud, and his dread majesty had to be indebted to the ready help of a footman to save him from being smothered. But these are trifles to your true sportsman. He was not smothered—that’s enough; so on he goes with greater zest than ever from the excitement of the check.” (p. 126)